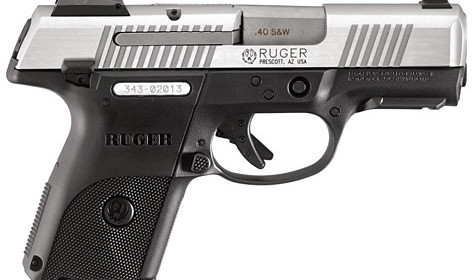 The Ruger SR40c is one of many firearms in the SR series. We recently reviewed the Ruger SR9c, the little brother to the SR40c, and enjoyed that firearm very much. Here are some thoughts on the SR40c, as reviewed by a fan of Concealed Nation.

This version of the SR series is chambered for 40 S&W. The compact SR is also available in 9mm for those who like the extra stopping power, but at the expense of 1 round in the compact magazine, and 2 rounds in the extended magazine. The 9c is identical to the 40c in length, width, height and weight. Having fired both I can say that the 9c is unsurprisingly a little tamer in recoil. Muzzle rise is reduced due to a low slide profile. Overall it is a very easy and fun gun to shoot.

There are numerous safeties on this handgun – one of the many reasons I love it.
It has a Glock-like “trigger within the trigger”, internal trigger bar interlock and striker blocker, magazine disconnect (more on this later), plus a visual and tactile loaded chamber indicator on the top of the slide.

It also has an ambidextrous manual thumb safety. This is an area where there will never be a consensus. The SR40c has a relatively short trigger (when compared to, say, an LC9) and as such I like a manual thumb safety. I have some guns with and without them, and for guns with long, heavy triggers (such as my LCP or my Sig P250c) the lack of manual safety is fine. For this, though, I like to have one. I treat every gun as if it has one anyway, as it does not matter if I sweep off the non-existent safety on a gun that does not have one. In this case, it is small enough to not get in the way, but large enough to be easy to hit when you need to. It ‘snicks’ on and off cleanly and positively.

To me, reliability is one of the most important factors of a personal defense firearm. If I am going to stake my life (or that of my family) on the firearm then I need to know it will go bang in my moment of need.

Several thousand rounds have been put through this handgun, and I have yet to have a failure of any kind. If I could not say that about the gun, I would not carry it.

The grip has a fine checkered texture, with fine grooves at the front and back. I find it is rough enough to gain a solid purchase without hurting my hands. It has a reversible backstrap, allowing it to be adjusted to fit smaller hands. As someone with relatively small hands myself, I love this. I find it fits my hand perfectly on the smaller setting.

Previous article: Self Defense Shooting: Why it's a good idea to have a lawyer lined up before something happens Next article: *VIDEO* Only you can prevent a Negligent Discharge