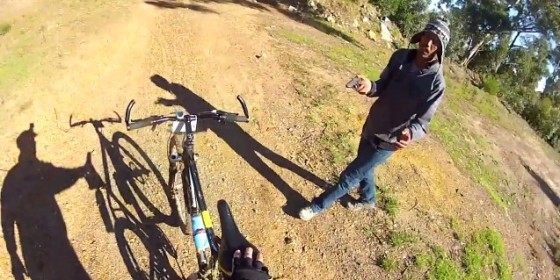 UPDATE — According to an article on the website enca.com, the three suspects in the video were arrested.

Western Cape police spokesman Andre Traut said two of the men were arrested on Sunday.
“Thorough investigation work led investigators to the suspects with the help of footage recorded with a camera which was mounted on the cyclist’s helmet. The first suspect aged 22 was arrested on Sunday at his residence in Sir Lowry’s Pass and a Luger firearm was seized. The same day another 22 year old suspect was arrested, also in Sir Lowry’s pass.”

This video serves as a reminder to us as to why we carry.

Just another scumbag who can’t seem to get a job to make an honest living. This sketchball comes to us from Somerset West (South Africa) and decided to rob a mountain biker while he was enjoying a nice ride on the trail.

MTB ride on Saturday 31st May 2014 from Ongegund, last few km’s before end of session. Armed gunman and 2 others stopped myself and took cellphone, car keys, oakleys and bike.

Fortunately they did not have a clue what a GOPRO was and this is the evidence that will assist in their prosecution!

We can only hope that this scumbag has internet access to see his ugly mug on our website. This is a face that no one can love. Watch the whole video below and play out the scenario.
If this were you, at what point in the video would you have drawn your firearm (if any)?