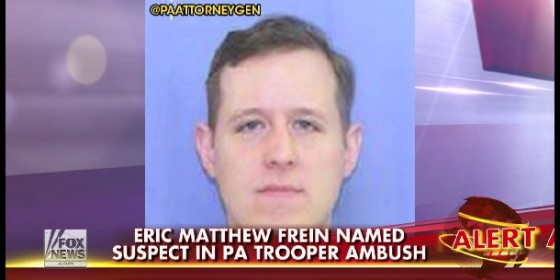 A 31-year-old man has been named as the suspect in the shooting of two officers on Saturday, killing one and injuring the other. The suspect, Eric Matthew Frein, lived with his parents up until a few months ago and is “very angry with a lot of things that go on in our society”. According to police, Frein has made statements that he wishes to kill more law enforcement officers and wants to commit mass murder.

Frein is considered to be armed and extremely dangerous. The shooting occurred in Blooming Grove, but they do not currently know the whereabouts of Frein.

A gunman killed Cpl. Bryon Dickson, 38, and critically wounded Trooper Alex Douglass outside the barracks during a late-night shift change, then slipped away.

Police were tipped on Frein when a resident spotted a vehicle that was slightly submerged in a pond. The resident called 911 to report the finding and upon investigation, police found an assortment of items that presumably belong to the vehicle’s owner.

In the vehicle, police found shell casings that matched those found at the shooting scene, Noonan said.

The resident who called 911 is exactly what people should be doing at a time like this. That resident’s alertness helped move this case forward and in the right direction.

Take another look at the photo of Frein. Again, he is considered armed and dangerous. If you see him or know of his whereabouts, dial 911 immediately to alert authorities.

Previous article: Convenience Store Owner Takes Down Armed Robber After He Threatened His Sister Next article: Are You a Deliberate Man? (Or Woman?)