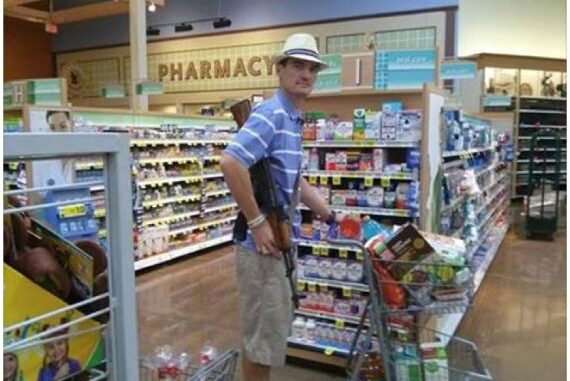 Are you starting to see how companies are forced into making public decisions? It happened with Starbucks and Panera, just to name a few. Before people like Mom’s Demand Action and Feinstein made a public spectacle about it, it’s never been an issue.

How many people are killed by citizens legally carrying firearms inside Starbucks, Panera or Kroger stores? It’s zero. It’s a non-issue.

But they love making it an issue.

While certain groups have indeed riled up certain other groups, policies have since changed and adjustments have been made. The whole reason MDA started the campaign against Kroger was from an old photo circulating the interwebs showing a member of OCT carrying inside a Kroger…last year.

Here is the letter that the trio wrote and sent to Kroger CEO Rodney McMullen:

We write today to urge you to adopt a policy that would prohibit the open carry of firearms in your stores. In doing so, Kroger would be sending an important message about your commitment to the safety of your employees and customers. This would follow similar actions by other retailers, such as Chipotle, Sonic, Chili’s, Target, and most recently Panera Bread.

As you know, gun extremists in several states have exploited the current Kroger policy by flaunting assault rifles as they shopped. These bizarre displays must be terrifying for Kroger employees and customers. There is simply no reason why someone would need an AK-47 to purchase milk, bread, or other basic necessities at a grocery store. However, the current Kroger policy allows for these demonstrations.

Kroger has a proud history as an innovator within the retail industry. Kroger changed the grocery business by establishing in-store bakeries and deciding to sell meats in the 1900s. These two improvements changed the way Americans shopped – not just in Kroger stores but in all grocery stores as they became commonplace. The company has an opportunity to again be a leader. A change by Kroger, the nation’s largest supermarket retailer, could have a similar effect by setting a new customer-friendly standard that other supermarkets follow.

Again, we urge you to implement a new policy that would prevent the open carry of guns in your stores. Thank you in advance for your consideration and we look forward to your prompt response

MDA tried unsuccessfully to get Kroger to change their policies a few weeks ago. Kroger responded by saying that they will, as always, adhere to local, state and federal laws regarding open carry.