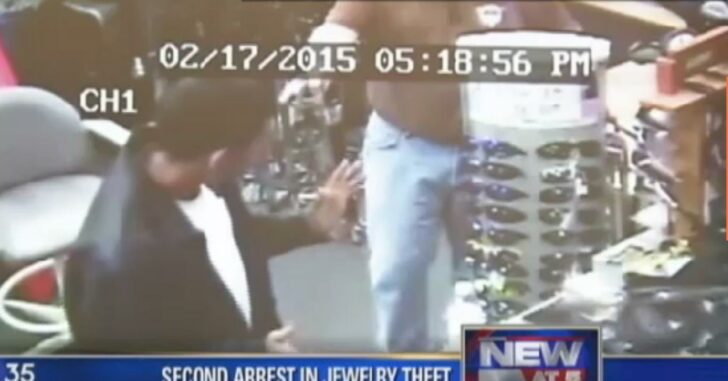 An alert and armed business owner made a citizens arrest of the third suspect in a string of over 40 burglaries.   Police had distributed email alerts describing the suspect, and Charles Fouche, owner of Beach Pawn Shop was able to get the drop on the suspect, William Hasencamp.

Mr. Fouche, along with a number of other jewelery and gold dealers had been sent pictures of the suspect, who police believed to be the ringleader of the three man team.  The other two suspects had already been arrested. The police had described the suspect as armed and dangerous.  That description justified Mr. Fouche’s threat of deadly force.

In the video, Fouche circles behind the suspect, then draws what appears to be a short barreled, stainless revolver.  It is probably a Smith & Wesson J frame .38 Special five shot, but it could be a clone from Taurus, or a Ruger.   Mr. Fouche did well in a dangerous situation, and he deserves thanks from his community.  But there are a few points where he could improve his technique, so I will mention them for the benefit of others.

First, his access to his revolver is perilously slow.  I do not worship at the alter of quick-draw, but the draw should be smooth and of short duration.  In this case it appears to take five seconds from the time the decision is made to access the revolver to the time it is presented.

Second, he is very, very close to the suspect.  Getting behind him is good, but using almost anything as a barrier between the suspect and himself would have made a disarm attempt very difficult.  Even a chair or stool between Mr. Fouche and the suspect would have provided some protection.

Third, it is a bad idea to extend your gun hand toward the suspect for emphasis.  At that point in the video it appears that Mr. Fouche’s revolver is perilously close to the suspect, and in danger of being taken away.  When you are within five feet, the weapon should be kept close to your body to prevent a disarm attempt.  Which brings us to the fourth point.

In the video Mr. Fouche uses a variation of the old FBI technique where the reaction hand is held across the chest.  The idea of this was to give some protection to the heart and lungs.  The technique is no longer considered valid.  A better use for the reaction hand in this circumstance is to have it in front of the body, similar to a basic martial arms stance, so that it can be ready to fend off an attack and to protect against any attempt to reach the weapon hand.  If used in this way, it is very hard for a person who is attempting a disarm to avoid being shot.

When the police are taking the suspect, Hasencamp away, he turns to Fouche and thanks him for not shooting him:

Slow to his knees, Fouche used his foot to push the man flat on the ground. Within minutes, deputies arrived and handcuffed the customer, later identified as 29-year old William Hasencamp. As they took him away, Hasencamp thanked Fouche for not shooting him.

Close cooperation between citizens and police is a combination that is hard for criminals to overcome.  High crime rates occur where the community does not trust the police, and does not cooperate with them.

©2015 by Dean Weingarten: Permission to share is granted when this notice is included. Link to Gun Watch

Previous article: Obama Aide Warns Citizens To Be Vigilant At US Malls; Citing Terrorist Threats: MOA Bans Guns Next article: [BEGINNERS GUIDE] Single Action, DA/SA, or DAO: Which One Is Right For You?