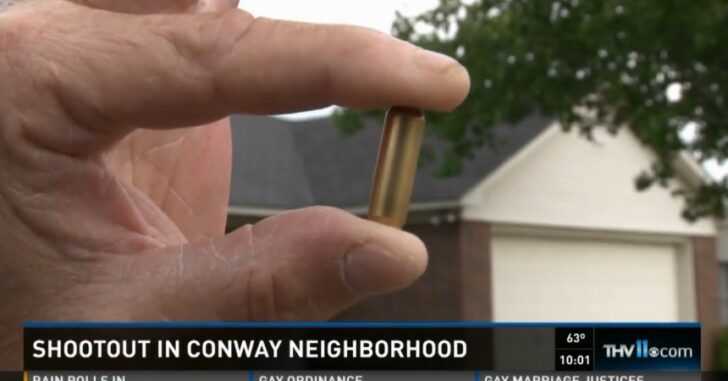 CONWAY, ARKANSAS — A quiet residential neighborhood near Conway, Ark. erupted in gunfire Monday night as an attempted armed robbery resulted in a running gunfight. Fortunately none of the over 20 rounds fired struck an innocent bystander.

A local TV station reported that James Allen was walking toward his car when he was approached by two men who demanded money. Allen, who holds a concealed carry permit, drew his gun but the robbers shot first. Allen returned fire while running away. He emptied a 20 round magazine while escaping the scene. Police later found a bullet hole in the garage door of a house on the street and another bullet hole in Allen’s car. No suspects are in custody and it appears that no one was hit.

From a photograph of a cartridge case found at the scene and the fact that the magazine of Allen’s pistol held 20 rounds, we can infer that Allen was carrying an FN Herstal FiveSeveN® Tactical pistol. This firearm launches a 31 grain projectile at 2,350 fps. The round has been evaluated by NATO as a potential replacement for the 9×19 Parabellum offering greater range and the ability to penetrate body armor.

We are pleased to see that Mr. Allen successfully defended himself with a legally carried firearm. We are concerned, however, that 20 high velocity rounds were discharged on a residential street during the incident. Remember that when you use your concealed firearm in a defensive situation, you are responsible for every round that you fire. Luckily, no bystanders were hit. This situation could have turned out a lot worse. Stay safe.

Constantine is a semi-retired business owner and consultant who lives in the Northeast US. He is an NRA Endowment Life Member and an NRA Certified Instructor. He enjoys all shooting sports as well as big-game hunting. Licensed to carry in over 30 states, he has carried daily for over 20 years and has instructed many novice shooters in firearm safety and basic shooting skills. His EDC (most of the time) is a Rock River Arms custom 1911 loaded with Federal 230 gr. HydraShok JHP. This is carried in a Mitch Rosen USD II Slimline IWB holster on a Mitch Rosen belt. A Chris Reeve Sebenza 25 and a SureFire LED flashlight round out the system.

View all posts by Constantine