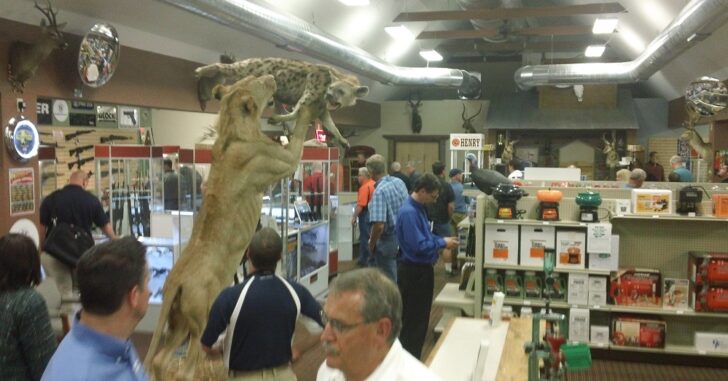 HOOKSETT, NEW HAMPSHIRE — I started noticing it in the beginning of November.  I have no idea why, but the gun stores up here in New Hampshire were always completely packed.  My suspicions seemed to mirror recent reports showing that gun background checks are soaring and thus, imaginably, gun sales — though there’s an error in that detail I’ll get to later.

When I first moved back up to New Hampshire in 2014, I remember driving by the local gun shops and there were always some cars parked in the parking lot, a steady stream of customers coming in and out.  But this is the first I remember where bulk ammunition is constantly being bought up as fast as it hits the pallets.  Men and women, some of whom may have just toyed with the idea of owning and carrying a firearm, are going in and purchasing their first gun.  Sig Sauer lives right down the street in Exeter and it didn’t take long once business picked up for them to install a HUGE pistol and rifle display inside one already cramped gun shop up here.

Sales are definitely moving at a level I haven’t seen since around the Sandy Hook shootings.

It’s clear: people are afraid.  People who may have only toyed around with owning a gun are going and getting equipped, long-time gun owners are looking at acquiring their fourth or fifth (or sometimes seventh or eighth) firearm for a growing arsenal.

On the surface — you’d think that’d be a good thing.  And in one way, it is.  I legitimately want American citizens who have the lawful right to carry to do so.  And that opinion isn’t just echoed by one lowly gun writer but by a plethora of law enforcement officials and others.

Here’s my beef — quality over quantity.  As a gun owner, I started off with old military surplus.  I did a feature article on the Astra A-100 which I picked up for $300 and damn near goes toe-to-toe with an $1100 Sig Sauer P229.  My Mosin-Nagant hits and over-penetrates targets at 350 yards.  The pump shotgun I’ve owned for 12 years has withstood the test of time and it was made in China back in the 1980s.

Why?  Because the quality of the materials used to produce those firearms, alongside with the simplicity of the engineering, produced guns that can last my natural-born life.

In the rush to make sure guns, ammo, and cleaning gear are all stacked up and ready to go, people (and *cough* *cough* some unnamed manufacturers) are inevitably cutting corners.

Here’s my unpopular opinion (and please do give me hell in the comments section below): it’s better to have a gun that will serve my purposes for the rest of my natural-lived life than it is to buy five or six nice, shiny new ones with a bunch of marketing BS attached to them.

Do you need ten guns that all do the same thing and have plastic parts that will likely need to be replaced after the first 10,000 rounds or barrels made out of inferior quality of steel that’s prone to degradation, rust, and getting bored out?  Personal opinion — nope.

When I’m looking to purchase a gun, I look at a number of factors:

There needs to be a clear delineation between marketing and effectiveness.  If you want to own twenty or thirty guns, that’s your right as an American citizen and I support that right.  However, for those who are conscious of their budget and are getting into the gun market for the first time — quality over quantity is always the safest bet.

Manufacturers are hot to trot to jump on the gun bandwagon and who can blame them?  However, in the fight to produce a cheaper gun with more bells and whistles, we as the consumer will have to understand that there are going to be obvious corners cut in that gun’s functionality.

So, if you’re one of those guys or gals showing up to the gun shop for the first time and getting ‘oooh’ed and ‘aaahhhh’ed about how pretty all those firearms look, take a moment to evaluate a certain reality when it comes to purchasing a firearm.  Pretty doesn’t protect.

This is an opinion piece submitted by contributing editor James England.  The views of this op-ed do not necessarily reflect the ideas or philosophy of Concealed Nation or any of its affiliates.