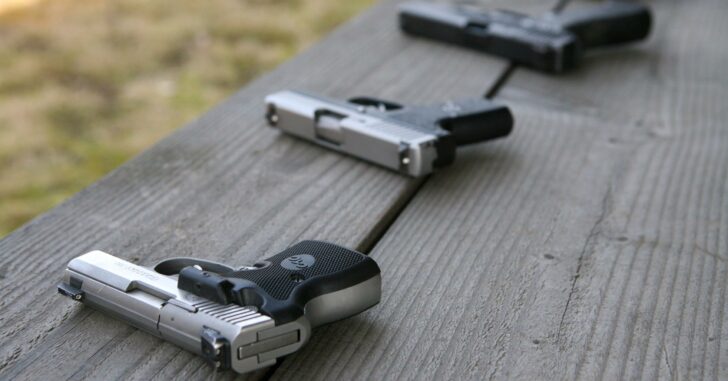 There is a lot more to choosing a concealed carry handgun than if it looks cool and comes in at the right price point. In fact, we would urge you right now to look at neither price nor aesthetics while choosing a handgun you intend to carry on you every single day.

Your concealed carry handgun should be something that you feel comfortable carrying every single day and using in an emergency life-threatening situation. That’s why, for the purposes of this article, we’re going to address dexterity and vision first.

Don’t get us wrong — cool looking guns are fun to shoot. In an ideal world, though, no one other than you or your range buddy should ever see your concealed carry handgun. If the bad guy needs to see it, he’s not going to give you points on whether or not it looks cool.

In this article, we’ll go over a couple qualifiers you may want to strongly consider when choosing your concealed carry handgun. We’ll include questions you ought to ask yourself when evaluating a pistol as well as some of our recommendations based upon our own personal experience.

Form Over Function — Why Your Hands Matter In Concealed Carry

We’ve reviewed a LOT of handguns in our time educating the concealed carry community about responsible practices. That’s given us a genuine appreciation for how a pistol or revolver fits in our hands. Not every firearm owner has the same size hands. There are men with extremely thick thumbs, so recessed magazine release buttons don’t work well. There are also people with small hands or even medium sized hands that don’t fit well on certain pistol grips. Here are some things to look for when evaluating a pistol you may be considering for everyday concealed carry practices:

If you answered ‘no’ to any of these questions while evaluating a concealed carry pistol, then it’s probably not the right pistol for your hand shape or upper body strength.

That’s fine. Don’t feel bad about that. You want that information now versus in an actual defensive gun use situation. Scale up or down, in terms of pistol size, until you find a pistol that you can safely operate. That’s not to say you’ll have to operate it with one hand or even switch out magazines — but if you can’t do basic drills and functions without something going wrong, it’s worthless to you.

Any handicaps, such as poor vision in one eye, can be taken care of! There’s no reason in the modern world of handguns why you should have to fret over sight alignment and sight picture.

If you answered ‘yes’ to any of these questions, you may really want to consider optical sights on your pistol.

The advantage of a pistol optical system is it greatly reduces the amount of time it takes to remove the pistol from holster and get it lined up on target. There’s a nice, crisp red dot right where the bullet will go.

Both Springfield and Glock make pistols with sight optics built in. The Glock Modular Optic System can be equipped on almost all of their Gen 4 model handguns. Specifically, the G17, G19, G34, G35, G40 and G41 all have the option of getting one installed. The best part is you can shop for the popular sight optic system that you feel suits you best. We recommend trying a few at a range before you decide to go with it as an everyday carry but we’ve gotten the opportunity to try the Glock MOS and it’s pretty tight. There are other manufacturers out there and after market producers that help bring optical sight systems to handguns. For an everyday concealed carry option, it’s fantastic. The hard part is dealing with the additional printing — but safety should always be your number one priority. Putting rounds where you need them to go is pivotal in concealed carry defense.

Once vision and dexterity issues are addressed, you should now have in your hand a gun that you can safely aim and shoot.

That’s where a real evaluation of a concealed carry pistol begins.

Choosing The Right Caliber For Your Concealed Carry Handgun

Once you’ve determined the gun fits right in your hand, you can aim it reliably, let’s talk about caliber.

There are a lot of different calibers for handguns out on the market. The most common for concealed carry is usually .380 ACP or 9mm. Don’t be fooled, though. The .380 ACP is just a shorter version of the 9mm. For many people who don’t handle the recoil of a larger caliber, like .40 S&W or .45 ACP, the .380 ACP round can come in quite handy.

A concealed carrier who can reliably put rounds on target with a .380 ACP may not be able to react as quickly with a .45 Auto. It’s not just about putting the first round on target, it’s about being able to put multiple rounds on target — quickly, accurately. This is why you test out the gun at the range prior to carrying it.

If you find that you can put rounds exhaustively in the bull’s eye, quickly, efficiently, and without any worry — that’s the caliber for you.

Many gun manufacturers offer small, concealable handguns that do not handle smaller calibers very well. They crack and whip because there’s no good recoil compensation built in. Larger handguns that handle 9mm are usually exceptionally smooth because they have the engineered space to handle the recoil effectively.

For instance, a woman who may find a Ruger LCP to be too aggressive for recoil may find a much larger Beretta 92 to be a perfect fit — despite the larger caliber. That’s why we first prioritize handling of the gun and then the caliber. Many manufacturers produce the same model of pistol chambered in different calibers.

So, for instance, you love the feel of a compact single stack Walter PPS but you’d prefer a larger caliber, Walther offers that same PPS in .40 S&W. The Smith & Wesson M&P Shield does the same thing.

In fact, when I initially reviewed the M&P Shield in .40 S&W, I found that I actually preferred the 9mm variant. It’s something that you only get to figure out by firing the gun.

Once you have the right fit, the right sights, and the right caliber, we hit some secondary considerations:

How Many Rounds Should You Have In Your Pistol Magazine?

For handguns made specifically for concealed carry, there is always a sacrifice in terms of size over magazine capacity. A Glock 43, a single stack 9mm, only holds about six rounds in the magazine. However, a Colt .45 ACP only typically holds eight. And, for reference, a CZ-75D PCR holds 14 rounds.

Magazine capacity is relative to the core question: how long do you plan on fighting?

If the answer is, “one and done or none”, then you can pretty much pick whichever handgun you desire.

As none of us are fortune tellers, however, we have to consider the possibility we may be stuck in a situation where we need to sustain our defense against one or more opponents intent on ending our lives.

Getting into the right habits — such as carrying one or more backup magazines and training to change them out quickly — is more important than magazine capacity.

We’re all people who appreciate the finer things in life. We know what looks good and feels right. But once we’ve narrowed the pool of guns down to a few choices that we agree fit well in our hand, can be aimed and operated properly, and are chambered in a suitable caliber, the rest really comes down to price point and cost.

In the firearms industry, it’s easy to find a gun that costs $300 or $3,000. The real question is whether or not we need it. There’s plenty of stores where you can pick up a used, reliable handgun at a fraction of the price of a new one. There’s also a certain comfort in knowing you are the first owner to use a handgun and, thus, you get the dubious distinction of breaking it in at the range. We’re not going to advise you on matters of aesthetic or price. We will, however, steer your attention to the last major consideration you should hold when choosing your everyday concealed carry handgun.

How Do You Intend To Carry Your Concealed Handgun?

We don’t want no weekend warriors, here. We want responsible citizens that make a promise to themselves to take their safety seriously. That means carrying your handgun every single day, everywhere you legally can — including the home.

Because of that facet, we need to discuss how you intend to carry your handgun.

Ask yourself the following:

If you answered ‘yes’ to any of the above, we would recommend you carry your concealed handgun on your body.

We wrote up a detailed article going over all the different locations on your body you can choose to carry a concealed handgun. Some are convenient, others aren’t. That’s why we need to look at our daily cycle of life.

Plan To Carry A Handgun Around Your Daily Routine

There are things we routinely do. We wake up, drive to work, work all day, and go home. That’s just one example. Other people have to pick up their kids from school or go to a community-related event. You know your routine better than anyone else.

Where on your body can you carry so that your gun stays physically on you for as long as possible? The gun should never slip or give when placed into a holster.

Nothing should be able to get inside the trigger well once it is placed into its holster. That usually means a tough polymer or stiff leather material that tightly grips the trigger. If nothing presses against the trigger, the trigger will not go off. This ensures you are safe to carry with a round in the chamber.

A gun and its holster are only as useful as your ability to grab either. That’s why you don’t see too many concealed carriers carrying at odd positions like 6 o’clock. That position isn’t always easy to reach. This may all seem rather exhaustive but it’s also a reflection of the type of thought you should put into choosing your concealed carry handgun.

As you can see, it’s certainly more than just price or looks. In fact, as we mentioned in the introduction, those two elements only really play in towards the end of the deciding phase.