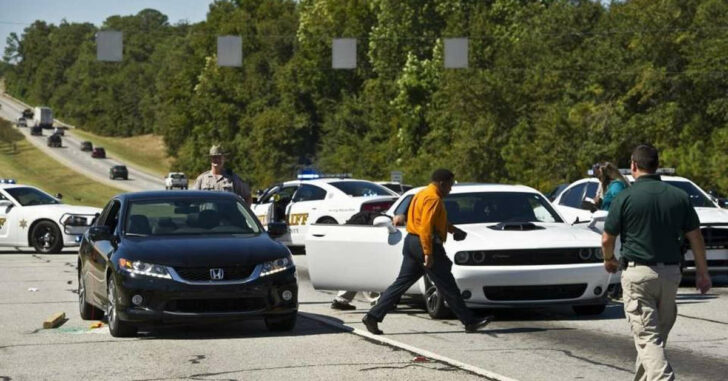 MACON, GEORGIA — When a man is shot dead and the only survivor is the man who shot him, there’s going to be a lot missing from the story. Unfortunately, when two Georgian gun owners got into a heated exchange on the highway, it’s impossible to know at what point this entire conflict could have been de-escalated. What we are left with is one person dead and the other, a licensed concealed carrier, potentially facing charges.

According to all accounts taken by police and deputies, the Telegraph reports the two did not know each other before a fateful exchange on I-80. What is known is one of the gun owners stopped on the side of the road and retrieved a handgun from the trunk of his car. He then sped up to meet the other at a stoplight. It ended with him being shot to death in the driver’s seat of his vehicle.

“Our folks have checked to see if these two individuals might have known each other or had some previous beef,” Bibb County Sheriff David Davis said. “But there doesn’t seem to be any kind of indication of that. Just two strangers that happened to meet with catastrophic results.”

The survivor of the encounter is a licensed concealed carrier who appears to have shot another man to death in self defense. It seems apparent that there was some sort of heated exchange prior to the event.

Family members and acquaintances of the deceased understandably describe him in terms of affection and endearment. All appeared surprised to see he was willing to draw a firearm against another man. But now that the event is done, it seems pretty clear that he must have posed a deadly threat to the concealed carrier.

One could take a simple glance at this case and conclude the following: a man defended his own life when posed with a clear and present danger. End of case.

That may be the interpretation that the district attorney will be forced to take as there is no clear evidence that bucks the story. As concealed carriers, I think it is a sober reminder that it is every gun owner’s duty and obligation to seek a path of peace whenever possible.

Not even a few days ago, we reported on another gun owner killing a concealed carrier in his own driveway, practically in front of his own kid, all because of a parking space.

That one was pretty clearly murder but we’ll let a jury figure that out.

This one appears to be less than clear cut but concealed carrier clearly had a right to defend himself once he could visibly see the other man as a threat. The deceased, in this case, had a firearm. Whether he brandished it or otherwise made it clear he intended to use it against the concealed carrier will be almost impossible to determine outside of the testimony given by the survivor.

This leaves a nasty shadow of a doubt. There may be the possibility that we may run across another gun owner or even a concealed carrier who may unwittingly present himself as a violent threat against us or our family. It would then fall to us to act accordingly. Until that time, it’s our sincere hope that most any argument or road rage situation can be resolved without anyone needing to die.

As concealed carriers we need to be the bigger men. Nothing done out of anger can be undone.

Previous article: New Terrorist Threats Highlight The Importance Of Armed Citizens At Polling Places... And Everywhere Else Next article: An Example Of What Not To Do: Permit Holder Holds Kids At Gunpoint For Knocking Down His Political Sign