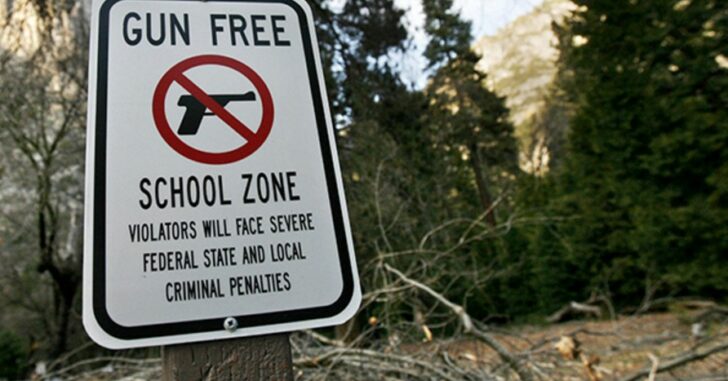 By Dean Weingarten via The Truth About Guns

One of the promises made by Donald Trump during the campaign was to remove gun-free school zones. The federal Gun Free School Zone Act has been an abominable infringement on the Second Amendment with no justification as anything other than an infringement on the right of Americans to bear arms. It does not improve safety. It does not protect “sensitive places.” It serves no legitimate purpose.

It has already been struck down once by the Supreme Court. And President-elect trump has vowed to repeal it.

The Gun Free School Zone Act creates an illusory area where most people are forbidden from bearing arms. The zone extends within 1,000 feet from the property line of any school. It’s unmarked and mostly unenforced.

It was struck down by the Supreme Court in 1995 in the famous U.S. v Lopez decision, where the Court concluded that there was no interstate commerce involved in a person bearing a firearm within a thousand feet of a school. That was the correct decision.

President Clinton, however, immediately pushed through a replacement bill, the Gun Free School Zone Act of 1995, with a few minor changes. The tweak intended to make the law pass constitutional muster was that it only applied to guns that had been “involved” in interstate commerce.

That’s distinction without a difference. Virtually everything can be said to be “involved” in interstate commerce. The molecules of oxygen that you breath have crossed state lines. The ore that was used to create the steel used to make a gun barrel crossed state and international borders. The water used to cool the turbines that created the electricity to power the motor that turned the machine to shape the gun barrel, crossed state lines.

This is the insane “thinking” that has made the phrase “interstate commerce” a nullity. The original law was struck down because everything is not part of interstate commerce, and the legislature cannot make it so simply by so stating.

A Trump administration can attack the law from two directions. One is the obvious frontal approach. Have Congress repeal the law. Given GOP control of both houses that’s plausible, and could work. The second option is to create a test case to bring the law before a newly constitutionalist Supreme Court, to be struck down on both Commerce Clause and Second Amendment grounds.

A sympathetic case could be made where a U.S. Attorney prosecutes an otherwise blameless woman for possessing a legal firearm within a thousand feet of a crime-ridden school in an inner city. A school zone prosecution case could be found or created and guided through the courts.

©2016 by Dean Weingarten: Permission to share is granted when this notice and link are included.

Previous article: Don't Be Like This Irresponsible Gun-Owning Mom In Indianapolis Next article: Armed Cafe Employee Draws Gun And Fires To Stop Armed Robbers In FL