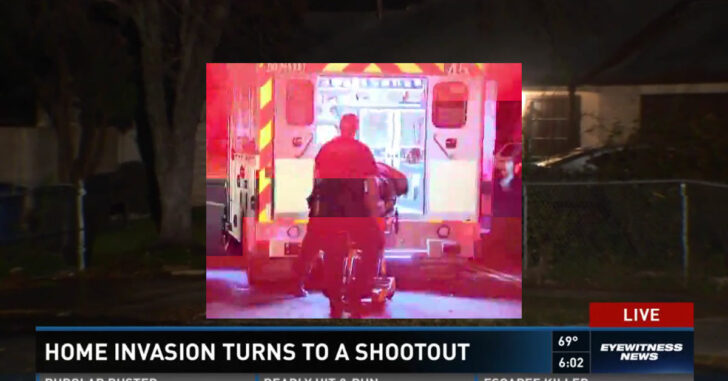 SAN ANTONIO, TEXAS — A shootout in a home resulted in two armed intruders showing up at a nearby hospital with gunshot wounds and a homeowner narrowly avoiding death. The exchange of gunfire thankfully stayed away from his family, even though guns were initially pointed in their direction.

According to KENS 5 Eyewitness News, San Antonio police confirm that the homeowner was shot in the hand and received a glancing shot to the head. He was taken to the hospital. The two armed intruders who broke into the home initially had their guns trained on his family. Not having a gun, he engaged one of the intruders and forced him to drop his gun. The homeowner then recovered the gun and a brief exchange of gunfire took place before both intruders fled.

They were dropped off at a hospital by a female accomplice. She was taken into custody shortly after them. One of the suspects is reportedly in critical condition while the other appears to be stable.

The homeowner was treated for his wounds and released.

Unfortunately, this is what happens when you don’t have a gun handy. When two guys kick down the door of your home and put your family at risk, your only choice is to fight. Without a gun, you’re in the unenviable position of having to fight an armed dude in close quarters to get his gun and then hopefully turn it on the other intruder before he shoots you.

In this particular case, the homeowner just barely managed to avoid having his head blown open.

How would this story have played out differently if the homeowner had been armed?

I’m just glad he’s alright and his family is safe. It’s bad enough having to fight for your own life and that of your family without the benefit of a firearm. He suffered injuries and I certainly hope for a swift recovery.

Gun ownership isn’t about being the toughest guy or gal on the block. It’s about being able to protect yourself from deadly force at any time or place. These bad guys knocked once and then bashed through the door. There was no way this situation was going to resolve itself without violence. From my point of view, I’d rather it be the person protecting his family that has the upper hand.

Carry every single day. A gun close at-hand is a gun you can use to protect your life.