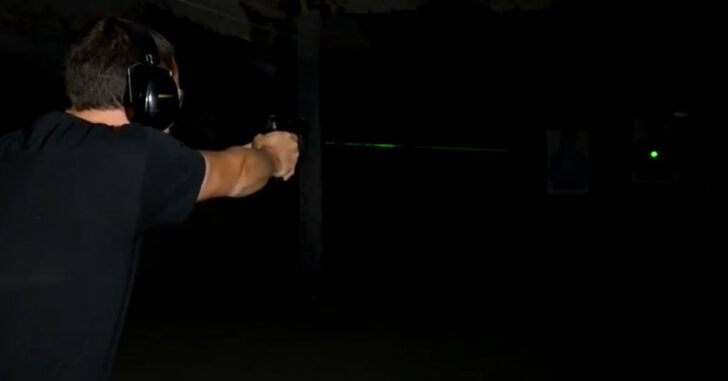 Accuracy and speed — two valuable components of prevailing in any defensive gun use situation. A big question we get asked is whether or not laser sights help improve either. For those who may not be familiar, there are quite a few aftermarket laser sights that can be installed in a variety of positions on most models of concealed carry handguns.

For pistols, we see a lot mounted forward of the trigger guard. These are often called centerfire lasers. Another popular location is the guide rod. It’s possible to insert a laser just below the barrel and it can be quickly activated by simply placing a finger onto the trigger. Those are usually called guide rod lasers. And there are still others meant to be mounted or integrated into the pistol grip of either a pistol or a revolver.

Because there’s a lot of aftermarket companies that produce lasers of varying strength, illumination, and style, it’s hard to classify all of them or say which ones would be particularly best for you and your shooting style.

The basic pros of laser sights:

The basic cons of laser sights:

If you’ve been following Concealed Nation for a bit, you’ll notice we have a lot of videos posted from TheFirearmsGuy over at YouTube. He’s a great, honest guy who takes the time to review a lot of questions that beginners and experienced concealed carriers have.

In his video back a ways, he tries out the guide rod LaserMax Laser Sight for his Glock 27 (.40 S&W).

When he tested his Glock 27 at a firing range, he was distracted when the laser went off target. This seemed to affect target acquisition time.

The strobing effect was a bit distracting. He seemed to shoot more naturally when he was using fixed sights.

Now, for a person like TheFirearmsGuy who has shot for quite a long time with iron sights, of course he’ll shoot more naturally when using those. Force of habit. This is probably what most experienced gun owners would have to deal with as well.

I’ve shot with centerfire laser sights and with laser optic systems like the Glock MOS and the Springfield XD Mod .2 OSP. In both cases, it took me time to get used to using a laser. Once I got used to using that laser, I noticed it slimmed down my time to acquire target and target accuracy at the range.

The most noticeable difference, I found, was night-time and low light shooting. I’ve included a video from IraqiVeteran888 that I feel sums up my experience.

Night time and low light shooting has always been a vexing thing for me. Night time shooting with iron sights is very difficult in terms of target acquisition and the precision of my shot groupings. And, in the scenario of having to defend my home at night, I think laser sights make sense.

The hardest pill for me to swallow when talking about laser sights is the cost.

A quality laser sight system, like a Viridian X5L-R or Crimson Trace CMR-201 Rail Master, I’m looking at an upfront cost of between $160-230. That’s not that bad. But I also have to remember to get new shells for my everyday carry IWB/OWB holsters. Not incredibly painful but this definitely isn’t a knee-jerk purchase.

The cost-benefit, however, I will only begin to realize when I actually train with that laser during my weekly drills at the range. If I am able to get to the point where a centerfire laser sight feels natural and I’m able to equip it as an everyday carry option, then I feel it would have lived up to its cost.

So, in conclusion, does a laser sight help improve accuracy and target acquisition?

The only way to truly find out is to put yours to the test.

Previous article: Death Of Two Armed Robbers In Unrelated Home Invasions Ruled As Self-Defense -- A Tale Of Two Crooks Next article: Bad Guy Just Got Out From Prison For Armed Robbery, Decides To Go Rob Some More -- Sorry, But This Homeowner Is Armed, Too!