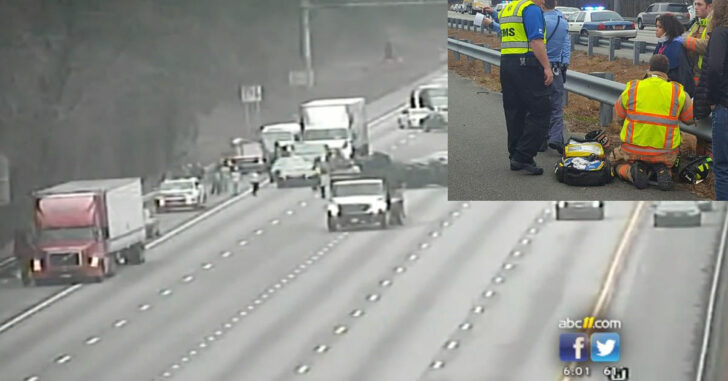 WAKE COUNTY, NORTH CAROLINA — A Good Samaritan took cell phone video just moments before a vehicle swerved and hit another person’s car on Interstate 40. The erratic driver smashed into an SUV, sending it tumbling over. His own car crashed into the guard rail.

The Good Samaritan pulled over and first attempted to help the woman in the overturned SUV. Other Good Samaritans arrived and told him that the suspect had fled into the woods. He then took it upon himself to jump over the guard rail and navigate down the embankment to catch up to the fleeing suspect.

“I had to run down that hill without killing myself,” the man recalled. “Then I tried to stop him at the fenceline down at the bottom of that hill and ordered him to stop. I drew down on him at that point.”

Once he caught up to the bad guy, he used his gun to hold him at gunpoint and escort the man back to the interstate to await the police. Because he anticipated that the police likely had received reports of a man with a gun running off into the woods, he immediately threw his hands up for police.

“Once I reached the top of the hill they didn’t know who was who, they just had reports of a guy who had a gun out there,” the man explained. “I went ahead and threw my hands up, asked them if they needed my handgun. They said no that I was fine.”

The police were able to quickly recognize that the man with the gun was the good guy. The bad guy, however, was identified as Ruben Flores-Garcia. Flores-Garcia was charged with a DWI in addition to reckless endangerment.

Now, there will be some in the audience that say, rightly, that the Good Samaritan put himself in harm’s way needlessly. After all, it wasn’t his car or his life in jeopardy. Those people are entitled to that opinion. Myself, I’m glad to see a man who’s willing to do the right thing. He did put himself in jeopardy. He also felt morally compelled to stop a criminal from escaping the scene where people were hurt.

The Good Samaritan also captured it on cell phone video. Now police have evidence in addition to a bad guy. He basically gave them everything they needed in a nice package with a bow on top.

No shots were fired. Miraculously, the victim of the hit-and-run wasn’t severely hurt. And the bad guy gets to face the music in front of the judge. Will that work the same in all situations? Probably not. However, I’m going to take a moment and congratulate this Good Samaritan on a job well done.

Previous article: President Trump Publishes His Take On The Second Amendment -- Calls It America's First Freedom Next article: Robber Shot By Liquor Store Clerk -- What Happens When Law-Abiding Citizens Refuse To Bend The Knee To Criminals