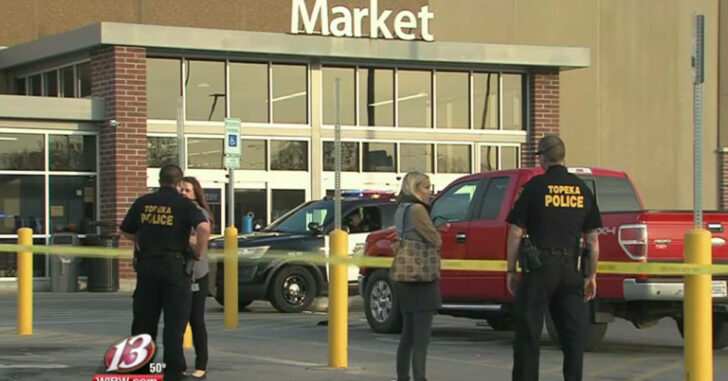 TOPEKA, KANSAS — In the parking lot of a local Walmart, two men got into a physical altercation involving bats and knives. A concealed carrier saw the fight and broke it up by drawing his pistol and holding them at gunpoint until police could arrive. The two men are believed to have known one another prior to the fight and one of them was bleeding from stab wounds. He was transported to a local hospital for treatment of his wounds.

According to WIBW News, the concealed carrier was questioned and released. No charges are pending against him. Both of the men involved in the melee, though, were charged with aggravated battery towards one another. The one suspect that went to the hospital has since been released.

This is one of those insane happenings that it’s hard to tell if the concealed carrier truly did anything good for either of them. In any case, he definitely stopped the altercation from getting any worse. The sheer idiocy of getting into a fight in a Walmart parking lot suggests neither of these men likely learned a lesson but at least the concealed carrier ensured no one else would get pulled in or potentially hurt from trying to break up that sort of fight.

I could easily see some well-meaning Good Samaritan rushing in to try to pull one man off the other and getting injured in that process. Definitely not worth it.

Under Kansas law, the concealed carrier was likely justified because he stopped a violent felony. I don’t usually promote the idea of a concealed carrier inserting himself into a conflict because of the potential for damage to that person. However, in this situation, it worked out.

If you end up seeing two idiots beating each other’s brains out in a parking lot, I’d suggest notifying the police and keeping a safe distance. It’s impossible to know how many friends either of these idiots have and the potential of getting ambushed or hurt is a bit more than acceptable.

The last thing we want to do is lose a good man or woman to grown adults that can’t use their words.

That said, I’m glad the concealed carrier was able to protect himself and those around him. It’s why a lot of concealed carriers choose to carry every single day. Because who’s to say what dumb things will spill out of an altercation between two men onto the proverbial laps of those witnessing the event?

Protect yourself first. Notify police. If possible, keep others from getting involved. Be a good witness when police show up. That’s my honest advice as to how to handle these sorts of situations.

Previous article: Alternate Concealment Methods; A Comprehensive Overview of a Few Popular Methods Next article: "HOPE I DON'T CATCH YOU!" Homeowner Chases Home Intruder Through House With His Glock