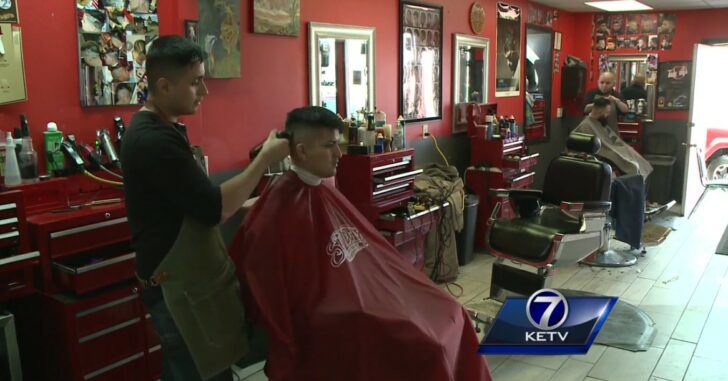 OMAHA, NEBRASKA — As customers lined up to get a trim at a local barbershop, two brothers likely never thought that they would need to use their concealed handguns to protect themselves.

According to KETV News, Lucas M. Ortiz, 23, entered the premises with an empty backpack and a shotgun. He allegedly dropped a backpack on the ground and pointed the shotgun at one of the brothers. Ortiz instructed them to throw all their money into the bag.

“When he cocked the thing in my face to me and my customer, that’s when I know he wasn’t playing, I kind of looked at my brother and I threw my wallet on the floor, and then my brother knew what to do next,” the barber said.

The barber and his brother drew down on the armed robber and that’s when rounds started flying.

“So I told him put the gun down, gun down, and I was pointing my gun at him, and he just shot at me,” his brother said.

A shotgun blast ripped by the first barber’s right arm, missing him by about an arm’s length. His brother managed to strike the intruder several times before the suspect retreated to the street and collapsed.

Police picked up the suspect, identified him, and brought him in for medical treatment before taking him into custody.

The barber acknowledges that his baby girl and his wife were upstairs. It was a miracle no one was hurt outside the armed robber.

“Me and my brother already had a game plan for robberies, because they’ve been robbing all this street right here,” the barber said.

The brothers were prepared to protect each other and their customers. They made the decision to carry concealed. They rehearsed a plan so they knew what to expect from each other. And, when push came to shove, they survived the incident.

Ortiz will be charged for crimes in connection with this case and police are still investigating the scene. As both brothers knew that a threat existed, they prepared. That’s what concealed carry is all about.

As frightening as it may be for that day to come, having a basic game plan and knowing you have someone else working alongside you can make all the difference in the world. That armed robber thought that by sheer force he could take everything those brothers had — and he was willing to take their lives to get it. This was not a situation that would have ended any better than it had.

Concealed carry is an everyday commitment to not just yourself but also those around you. Customers were put at danger because this armed robber. His own life and that of his brother were at risk. His family’s life and well-being was at risk. It’s times like that you have to fight to defend yourself. There are no other options. Being a victim of a violent crime, for a concealed carrier, is not an option taken without a fight.

Previous article: Dumb Shootout Outside A Bar Leads To One Dead And Another With A Shot To The Buttocks Next article: Armed Citizen Stabbed In Neck And Head By Teen, Then Shot At Suspect. The Rest Of The Story Will Piss You Off.