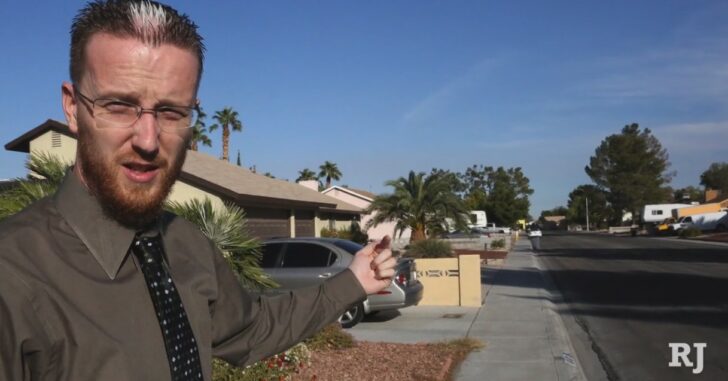 LAS VEGAS, NEVADA — A man who made a habit of carrying his firearm every day is now credited with successfully thwarting an attempted kidnapping in his neighborhood.

That man, Justin Pearson, told his story to reporters;

As he always does before leaving his house, Pearson, a concealed-carry weapon permit holder, put his pistol on his hip. The 911 operator asked for a license plate number, so Pearson moved down the street to get it.

“He had lost control of the car and almost went into a house at the end of the street,” Pearson said. The BMW then turned around and stopped in front of a neighbor’s yard, where a 6-year-old boy was standing.

As Pearson is on the phone with a 911 dispatcher, he sees the man get out of the car and grab the boy.

“He was a very big dude, and I’m not a menacing person by any means,” Pearson said. “I don’t think I could have physically stopped the guy. It would have been super ugly if it was just me versus him.”

“I carry a concealed firearm everywhere I go,” Pearson said. “I lifted up my shirt and put my hand on my gun.” “‘Hey, stop!’ I said, real loud. He turned and looked at me. There was just enough of a delay for the kid to get out of the car. I know he saw the firearm.”

Pearson had control of the situation with his still-holstered H&K VP9, making the suspect decided to drive away instead of pursue the kidnapping attempt. And the (not so) best part? The police took 17 minutes to arrive after Pearson had stopped the kidnapping. We are not placing blame on the police, because we know that they have a difficult job and cannot be everywhere when needed. But we are saying; they can’t be everywhere when needed.

As it turns out, the kidnapper was the boy’s biological father, and he did not have parental rights nor permission to take the boy.

Pearson didn’t even need to draw his firearm in order to prevent this kidnapping from progressing. Simply having it with him, and the suspect knowing it was there, was enough to stop him in his tracks and send him fleeing.

As a side note to this story, the author of the sourced article seems to be a very pro-2nd Amendment person. It was refreshing to see his comment at the end of the article that highlighted the importance of armed citizens;

These kinds of stories rarely make the news. But they happen more often than we realize and underscore an important point. Concealed-carry weapon permit holders prevent crimes.

Thank you, author Victor Joecks, for being a journalist who leaves a little important commentary to your article in hopes that it will change someone’s mind. It’s refreshing to see!

Evlin is new to the world of firearms, and enjoys writing stories that show armed citizens defending themselves against those who look to inflict harm. She is also interested in world news related to self-defense with firearms, and the hurtles that many Countries face in this category.

View all posts by Evlin Costa