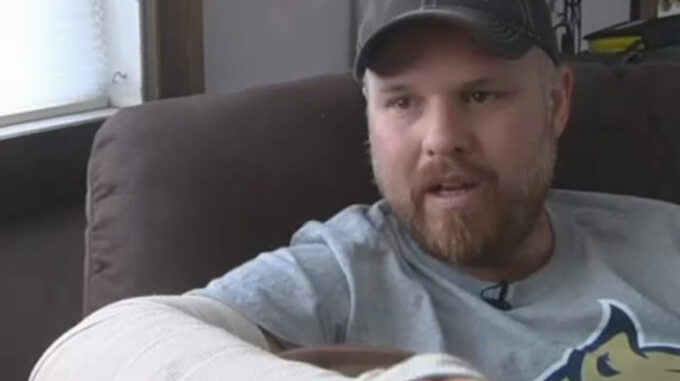 By Dean Weingarten via The Truth About Guns

On the morning of 24 September, 2017, David Buckallew, 63, and his son, Rory, 35, were hunting black bear. David was along as an observer. Only Rory carried a rifle, a Remington model 700, semi-customized in the wildcat 6.5mm-06 caliber. Dave carried a Taurus Tracker stainless steel 4 inch .44 magnum in a Montana Holster shoulder rig made by Norm Schertenleib. Rory carried a Glock model 20 in 10mm.

The morning was cool with a light frost in low spots at Kalispell, Montana.  There was little wind. Sunrise was at 7:28 local.  Before 9 am, the men had spotted a black bear and were attempting to get in position for a shot. They were moving through thick cover on the steep side slope east of the Hungry Horse reservoir.

Then they heard it. A large animal was crashing through the undergrowth. It was moving along the side slope angling up the hill, above them. As it came directly above them, about 30 yards away, they could see bushes move. It changed direction and charged down the hill at them. Neither man knew what it was. It was coming directly at them. Both men fired a shot in front of the beast in an attempt to divert it or scare it off. David fired his .44 magnum Taurus, Rory his model 700 bolt action Remington rifle. The animal was only 7-8 yards away, but the cover was so thick, they could not see it.

In a split second, the bear appeared as it slid to a stop only two feet from and just beyond Rory. The bear lunged at Rory, and Rory jammed the barrelof his rifle into its mouth. Then, as the bear jerked aside, he hit the bears head with the barrel.

The bear slapped the rifle aside, sending it spinning out of Rory’s hands. As the bear lunged for his face, Rory instinctively blocked with his right arm. The bear grabbed him by the elbow, its nose only inches from Rory’s. With the bear coming at him, its mouth was within two feet of his .44 Tauruswhen he fired the last shot. The bullet went alongside the bear’s head, into its neck, penetrating the chest cavity.

Dave says he doesn’t know if it was the three solid hits with a .44 magnum, or the muzzle blast of the revolver into the bear’s face that turned the bear. The bear whirled downslope. It paused momentarily, 15 feet away, looking back. Then it crashed off into the brush.

Dave did not try another shot. He knew he was out of ammunition. He had been taught, 50 years ago, to carry a revolver with an empty chamber under the hammer. In the five shot Taurus, that left him four rounds.

One had been fired to try to turn the downhill charge; the other three went into the bear.

Dave asked Rory “Did it get you?” Rory told him yes, and it hurt. Dave was relieved not to see any arterial spurting of blood, splintered bones, or a mass of torn meat.

He told Rory his Taurus was empty.

Most people in a deadly fight are not able to count their shots. Dave could, and did. Experienced shooters and hunters are often able to “call their shots”, and say where each shot went. Dave told me he informed the Fish, Wildlife and Park (FWP) officers where each shot had connected, and they told him he had been within a couple of inches for all three hits.

Rory handed his father the 10mm Glock to stand guard while he retrieved spare .44 magnum ammunition from Dave’s pack.

Dave drove back to Kalispell, as they came into cell phone coverage, they called Rory’s wife, Kristine. They told her to call Urgent Care, so they could have Rory’s wounds treated. When they got back, Kristine told them Urgent Care said it would not treat a bear attack victim. Rory would have to go to the hospital. Rory insisted on taking off his hunting shirt. He left it at the house so the hospital staff would not cut it off him in treatment.

At the Kalispell hospital, one of the staff has specialized in treating bear attack victims. He treated Rory. Fortunately, no bones were broken. Dave had shot the bear off of Rory before massive damage was done to his arm. There were a couple of scrapes on Rory’s shoulder from the bear’s claws. The claw scrapes did not require stitches.

Dave does not know who called FWP. It may have been someone at the hospital. As Rory was being treated, Dave accompanied the FWP officers back to the attack scene.  The FWP helicopter, Two Bear Air, arrived. By this time it was afternoon. The sun had heated the slope, so infrared detectors on the helicopter could not find the bear.

The FWP officers told Dave if he had bear spray, he might have avoided having to shoot the bear. Dave noted the FWP officers were all armed with shotguns and had loaded pistols on their hips. From mt.gov: “FWP would like to remind hunters and recreationists that carrying bear spray is another deterrent option.”

Dave told me if he had spray and had sprayed the bear, he would have had to spray Rory as well. Then, if the bear turned on him, Rory would have been unable to help.

It is a reasonable assumption. Tom Sommers was attacked through a cloud of bear spray, three weeks earlier, near the Idaho/Montana/Wyoming border. The bear had him by the head when his friend Dan sprayed the bear again from two feet away. Sommers was blinded by the spray and the blood. When he fired his pistol, he could not see the bear. He missed. Whether it was the spray or the gunshot, the bear left the scene and did not attack Sommers again.

David Buckallew said “I will depend on my .44 magnum.”

The bear never vocalized during the attack. Dave said you could hear the loud breath of the bear, but there were no warning growls, or other sounds from the bear.

FWP found the dead bear the next day. It was a 12-year-old dry sow. It was not lactating and did not have young cubs. It was about 250 lbs, and in good shape. 250 lbs is a reasonable weight for an adult sow grizzly in the mountains. The bear did not have any tags, or previous history of aggressive encounters with humans. Unprovoked grizzly attacks have been noted throughout the history of grizzly bears.  The current fad is to always assign a human motivation.

Dave and Rory never heard or saw any other bear near them. There is no evidence that any cub, or yearling grizzly, was nearby. The sow’s body was found about 50 yards from the attack location.

In the fall, bears feel a tremendous urge to eat and put on weight for the winter hibernation. Timothy Treadwell and his girlfriend Amie Huguenard were killed in an unprovoked grizzly attack in Alaska on October 6th, 2003. They did not have a .44 magnum. Neither survived.

©2017 by Dean Weingarten: Permission to share is granted when this notice is included. Link to Gun Watch

Previous article: Great Question: If You Notice, Should You Tell Someone That They're Printing? Next article: An Individual, Not A Truck, Kills 8 In NYC Terrorist Attack