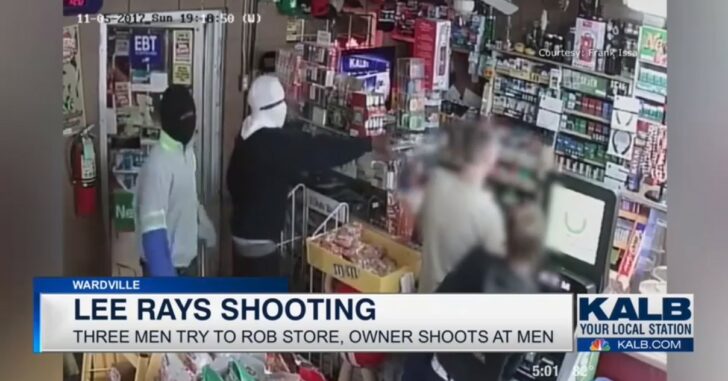 WARDVILLE, LOUISIANAN — The owner of Lee Rays General Store, Frank Issa, shared surveillance video with reporters that show three masked men coming into his business and attempting an armed robbery. It was only an attempt, because the store owner was armed and with the help of his brother, were able to fire at the three suspects.

Issa said they demanded money. And one pushed two customers out of his way and jumped on the counter. He continued to point his gun at Issa.

That’s when Issa’s brother distracted the attempted robbers, allowing Issa to grab his own gun. Issa began shooting at the three men, he said he hit one in the stomach and one in the arm.

Watch the surveillance video below:

One suspect is still on the run, one is still in the hospital, and the other was apparently treated and then released to his parents.

Huh? Released to his parents?

Fast forward one day and media reports that the juvenile was instead placed in lock-down at a youth home. He is being held on numerous charges including attempted armed robbery, possession of a handgun by a juvenile, criminal conspiracy, attempted first-degree murder and more.

Police are also searching for 23-year-old DEVON ANDREW THOMAS, who is pictured below. He is the third suspect, and we hope that police are able to locate him. It’s a great day when citizens are able to defend themselves against thugs like these three, and even greater when they are held accountable for their crimes. Now we can only hope that the justice system will keep them behind bars for a long enough time.

Previous article: The Top 5 Excuses NOT To Train *WATCH* Next article: Father Steps In With Gun During An Attempt By Four People To Kidnap His Daughter