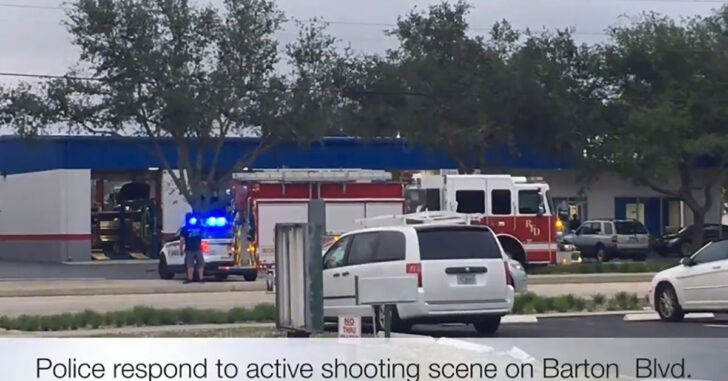 ROCKLEDGE, FLORIDA — A gunman opened fire outside an auto shop in Florida on Friday, killing one and injuring two others. With no apparent connection to anyone at the auto shop, the suspect opened fire indiscriminately.

You won’t hear about it in the headlines, because it was a thwarted mass shooting. Multiple employees at the auto shop were armed and ready to defend. And they did so, successfully.

A man armed with a .45-caliber handgun and a lot of ammunition wandered onto an auto repair shop property and began firing in the parking lot Friday afternoon, police said.

The gunman killed one employee and paralyzed a second. That’s when the employees at Schlenker Automotive fought back with equal force, Rockledge police chief Joseph La Sata said.

The suspect was shot twice and effectively neutralized. He was taken to the hospital under police watch. His condition is critical.

You won’t hear about this in the headlines because it doesn’t have any meaning to mainstream news if not a lot of people die. The better story here, of course, is the fact that we have a mass shooting attempt that was successfully stopped by multiple armed citizens.

Guns save lives? You bet your ass they do.

“If not for the brave, quick thinking of the employees at Schlenker, this could have been a lot worse,” La Sata said. “Mr. Bailey had multiple magazines on his person. He was intent on doing harm. The employees stepped up.”

Roger Lee Smith, a 50-year-old long-time employee of the shop, was shot and killed after going outside when he heard the shot that paralyzed the other employee.

It is tragic that Smith lost his life, and that a 25-year-old is now paralyzed at the hands of a person bent on destruction. The only thing we can do is to keep everyone affected in our thoughts, and do the next targets a favor by continuing to be armed, trained, and ready if something like this were to come our way.

Previous article: Two Idiot Hunters In NY, One Tragic Death Next article: Woman Shoots Teen In Head After He And Others Breaks Into Her Home