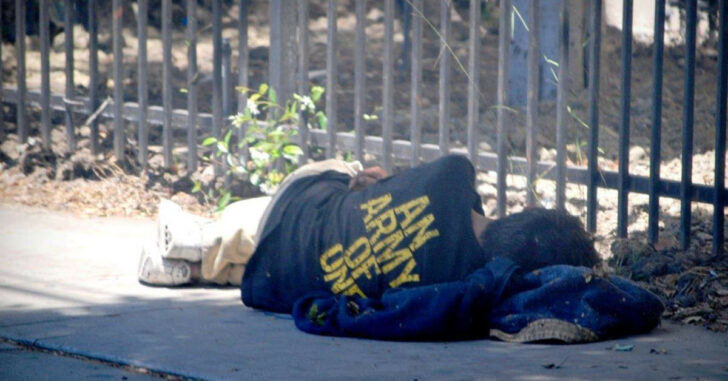 I work with a local Veteran’s group and we often do activities like get warm jackets and food to the local veteran’s homeless shelter. This shelter is located in Manchester and works specifically with just homeless vets.

Right now, the temperature in New Hampshire hovers around single digits. Good food, calories, and warm clothing aren’t just pleasantries — they’re survival. Many of the veterans in this shelter don’t have vehicles and depend upon local transportation to get to the VA Hospital and work.

While interacting with one guy out in the community, I noticed he carried a gun in his waistband. That’s nothing new in New Hampshire but it did give me pause. Here he was, a guy who barely had anything to his name, and he kept a gun.

I’m also a concealed carrier so I asked him about his gun.

The first thing he blurted out was that he wasn’t a felon and he had a right to carry guaranteed by the Second Amendment.

“Whoa, not a problem. I’m a concealed carrier, too. Just curious why you carry.”

Turns out, before he found out about the vets homeless shelter in Manchester, he was on his own. New Hampshire is a tough place to be homeless. On your own and no vehicle equated to a lot of walking, a lot of pushing in to get into a shelter at night, and when that failed, sleeping in rough areas of town.

He was a pure bred survivalist, in my estimation. He was about the same age as me. Similar circumstances. I could see too easily how I could have gone down a similar road.

Now, here he was, tougher than leather, hauling bags of groceries and supplies with me into the basement.

I asked him if the gun ever came in handy.

He stopped dead in his tracks and looked me in the eye. His eyes were crystal clear blue and absolutely dead cold.

“I wouldn’t be here talking to you if I didn’t have one.”

After we finished hauling groceries into the shelter’s basement, I took him out for a meal so I could ask him some questions about what he had to go through and how he handled those situations.

The gun he carried was a Zastava M88A Compact. He picked it up for less than $250. The guy carried one magazine in the well and one in a zipped up inner jacket pocket. I didn’t know too much about the Zastava M88A and he chuckled.

“When I was in Bosnia, we saw plenty of ’em laying about. My sarge let me and a few of the guys plink rounds through a couple we recovered. They used the same rounds we got for our pistols [M9 Beretta].”

He didn’t figure he’d ever see another until he said the police took his pistol when they searched him while he was sleeping under a bridge. The last pistol he owned was a used Glock 19 — Gen 3 by my guess. He liked it a lot but he admitted he liked the Zastava better.

I was honestly curious why he thought the Zastava was a better choice. I own a Glock 19 and it’s one of the most solid handguns I’ve ever owned.

The Zastava M88A only holds 8 rounds in a magazine. He doesn’t carry with one in the chamber and I doubt he carries with defensive ammunition.

I asked him what his experience was with having to defend himself.

When he did get a chance to sleep inside, he’d take it. He told me that sometimes led to sleeping in iffy or unsafe conditions. He admitted to sleeping in a flop house, the floor littered with empty beer cans, trash, and urine jugs. Homeless guys like him would spend $10 to get a spot on the floor.

He said that for the past eight years, heroin addiction has been really bad. He’s never been an addict but he’s seen plenty. Addicts weren’t above robbing the homeless. Gangs of young kids — some not even teenagers — would also prey upon homeless people.