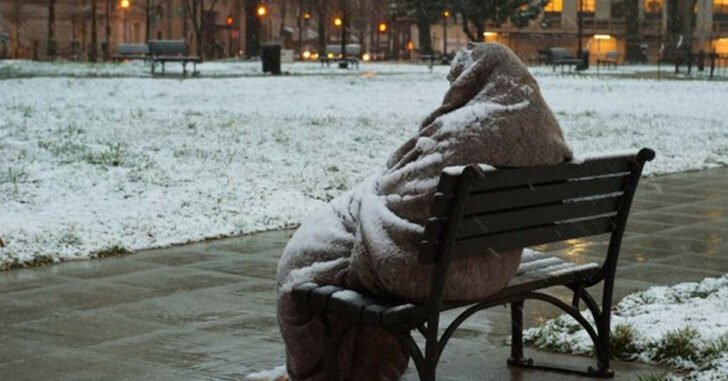 Continued from Part I.

Flop houses. In New Hampshire, it gets cold. It gets cold and stays cold for a long time. If you’re poor and you don’t have a place to sleep, chances are good you’ll end up finding floor space in a flop house.

This is where homeless people who can’t get into the shelters go. There’s plenty struggling with addiction. Plenty addicted to heroin.

When it’s 6ºF and the weatherman says it feels like -12ºF with wind chill, you need to sleep inside. Anything close to or above freezing will work. The closer to 32ºF or greater, the better.

Heroin addicts can’t use in the shelters… Or if they’re caught, they’re tossed out. Same goes for alcohol. The problem is that for those who aren’t using, they either can wait around for a space to open or they have to take their chances elsewhere.

When the vet told me this, I instantly understood how a guy who wasn’t using could end up sleeping next to people who were.

In either case, he learned to keep his gun on him. He’s had people try to rummage through his belongings. He even had one situation where a guy was threatening to kill another guy with a kitchen knife and he was stuck trying to sleep on the floor between them.

His days are looking up, he told me. He’s getting care at the local VA hospital and enrolled in several programs.

He told me there’s legally no reason why he can’t own a gun and he’s been thankful he’s had it — even though he admits he’s never had to use it.

Concealed is better, he told me. When people looked at him, he knew they only saw his poverty, not a man trying to survive in the face of severe physical and mental hurdles.

It also helped when sleeping in rough areas. If nobody knew he was armed, he reasoned, they’d either leave him alone or find out the hard way.

He has a girlfriend who has two children and is also homeless. She’s receiving care through several non-veteran related programs. He told me that she felt safer sleeping knowing he had a gun and could use it to defend her and her children. Now that she has a home, he sometimes sleeps over at her house. It’s in a rough section of Manchester — of which there are plenty — and she likes that he keeps the gun on him and is responsible with it.

I asked if she would be down for an interview but she declined.

Because there’s no sense writing a whole series of articles on concealed carry and homelessness (or if there is, please leave a comment and let me know), I’ll put some condensed notes that the vet asked me to pass along:

I’m not going to pretend that all of that advice is strictly legal and should not be construed as legal advice. But, I will advocate it’s always good to know your rights, respect the law, and don’t carry a gun while under the influence.

Overall, it was a pretty educational experience with that vet and, because this is the internet, there’s always the chance there’s a gunowner out there that may either be facing homelessness or is currently homeless.

If you’re a veteran facing homelessness, the Department of Veterans Affairs has a whole host of programs that can help you get closer to where you want to be.

Previous article: Robber Shot By His Own Gun While Trying To Rob Ride-Share Driver Next article: Man Shoots At Vehicle Burglar, Gun Confiscated And Future Unknown