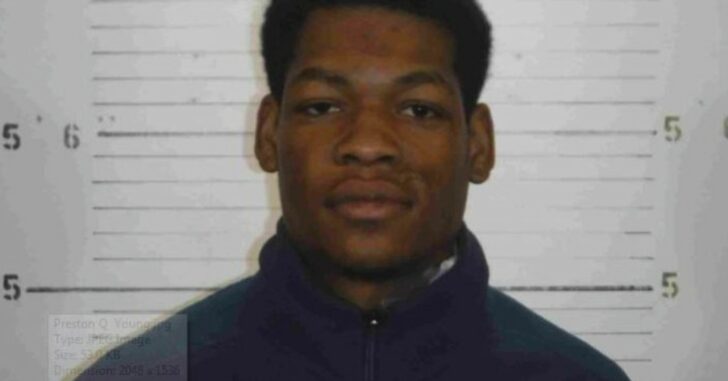 BELLEVILLE, ILLINOIS — A 23-year-old thug was on a hot streak with some armed robberies and strong-arm robberies, but it finally came to end when he met his match; an armed citizen in a park that wasn’t going to be his next victim.

A man suspected of a home invasion, a robbery and an attempted robbery has been apprehended by the St. Clair County Sheriff’s Department, officials said Thursday.

Preston Young, 23, of North 42nd Street in East St. Louis, was located after the victim of an attempted robbery in Washington Park shot Young on March 10, police said.

It isn’t clear where Young was shot, but it is clear that he’s in jail and will now need to answer for his crimes. Multiple crimes.

Young is also charged with home invasion while armed with a firearm in the robbery of an elderly man on Jan. 12 on Gerard Lane in Belleville, and is charged in the strong-arm robbery of a female on the Metro Link train near the Fairview Heights Station on Jan. 24, police said.

He is also charged with attempted armed robbery, felon in possession of a firearm and aggravated battery in the attempted robbery on March 12 during which he was shot, officials said.

Young has a felony conviction from 2013, officials said.

This young man was getting into more and more trouble, and becoming more aggressive as he went along. It’s a story that we see all too often, and one day he may end up killing someone because he decided on the wrong path in life.

He likely won’t be in jail/prison for too long, and then you’ll find him back out on the streets committing more crimes. Let’s hope that’s not the case, but it usually is.

For that reason, it’s fortunate that we have armed citizens who are willing and able to defend themselves against these low-lifes. Young may not be so lucky next time, and his thug life could come to a quick hault.

Previous article: Are You Single And Love Guns? Here's A New Pro-Gun Dating Website That'll Make You Feel At Home Next article: Michigan Teen Misses Bus, Is Fired On For Asking Directions to School