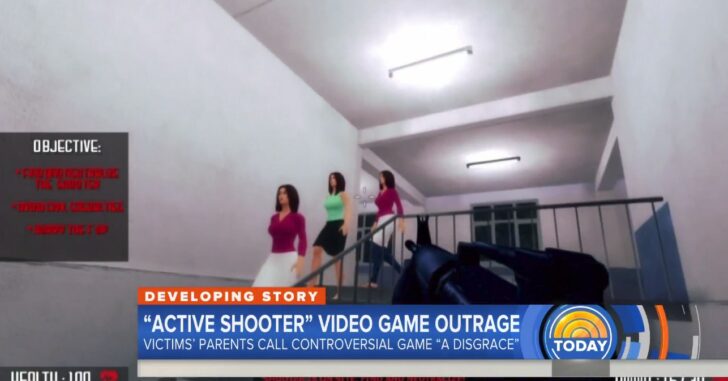 A video game that simulates school shootings was set to be released on June 6th by a company called Revived Games, but the release was cancelled after over 200,000 people signed a change.org petition requesting that it never see the light of day.

The petition can be seen below: The game was marketed as a ‘dynamic SWAT simulator’, but people weren’t buying it because the player could play as either the shooter or as a SWAT team member.

After the backlash, the developer released the following statement:

Since this games storefront has been live, I have been stormed with accusations and heavy critics from people across the globe. While I see everyone’s points of view and where are they coming from – I wanted to clarify a few things:

First of all, this game does not promote any sort of violence, especially any soft of a mass shooting. As I said in the description of the game:

Active Shooter is essentially a dynamic SWAT simulator in which dynamic roles are offered to players.

Originally when this game started its course of the development, I have planned on having SWAT only based game-play. Then I thought about adding more gameplay to it by adding additional roles: of the shooter and the civilian. While I can see people’s anger and why this might be a bad idea for the game, I still feel like this topic should be left alone. As I mentioned on steam discussion forums, there are games like Hatred, Postal, Carmageddon and etc., which are even worst compared to “Active Shooter” and literally focuses on mass shootings/killings of people.

I have wrote to Valve regarding this game and waiting for the reply. After receiving such high amount of critics and hate, I will more likely remove the shooters role in this game by the release, unless if it can be kept as it is right now.

Thanks a lot for taking your time to read and leave your responses!!!

But the reason for the pull apparently wasn’t because of the game content, but rather because of the history the developer and publisher had with the company that would help launch the game.

The owners of Steam, the platform that the game would run on, did an investigation after the complaints and found something else.

But on Tuesday night, Valve Corporation, the owner of Steam, announced it had removed the game after an investigation, and found that the developer and publisher was actually “a person calling himself Ata Berdiyev, who had previously been removed last fall.”

“Ata is a troll, with a history of customer abuse, publishing copyrighted material, and user review manipulation,” Valve said. “His subsequent return under new business names was a fact that came to light as we investigated the controversy around his upcoming title. We are not going to do business with people who act like this towards our customers or Valve.”

Regardless of why it was pulled, it’s gone. At least for now. But I wonder how people in the firearms community feel about a game such as this being potentially released. Do you think it should be released, or do you feel it’s best to not produce games such as this one? Chime in below with your comments.

Previous article: Judge Calls For Knives To Be 'Rounded' To Stop Stabbing Deaths. Seriously. Next article: Kidnapper Shot Through the Heart, and He's to Blame