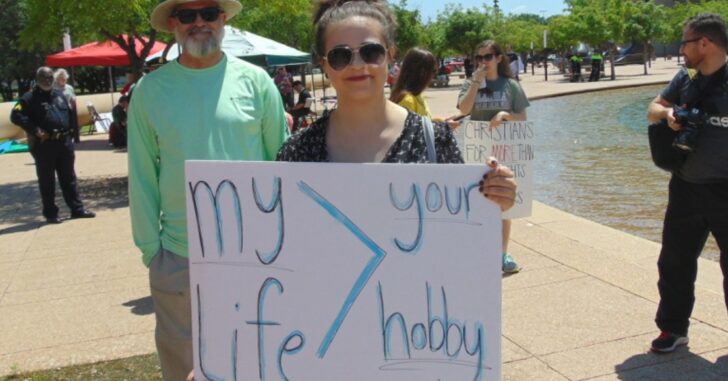 There are a significant number of people in the United States who have chosen not to own firearms, and who want the government to ensure as many other Americans as possible are forcibly disarmed. They are a small, but vocal minority. To most people in the gun culture, this is an alien mindset.

It’s worthwhile to try to understand the other side of an argument. The anti-gun left routinely attempts to shout down and silence gun rights supporters. One of the strengths of Second Amendment supporters is the willingness to engage with people who would like to see them forcibly disarmed.

There is a simple way to understand the thinking of most people who want you disarmed.

Make the internal assumption, for the sake of understanding them, that you have deliberately chosen to be unarmed. It isn’t that hard to do. Being armed requires effort. You have to choose to be responsible. You have to practice self-discipline. You adopt safe gun handling practices and you train. You think about unpleasant possibilities and plan for them. In many states, becoming armed takes considerable legal effort. You have to devote time and money to be being a gun owner.

Once the decision has been made to be unarmed, many of their reactions to gun owners become understandable.  Unarmed people are often uncomfortable around those of us who own and carry guns. Armed people have a significant power advantage over unarmed people. Many unarmed people don’t want to be reminded that armed people have that power. To avoid this, they want to force other people to be disarmed.

That explains why some unarmed people dislike concealed carry, but absolutely hate open carry. Open carry forces them to confront the power differential they have chosen. It reminds them of an unpleasant reality and they feel intimidated.

People are more accepting of information that reinforces their personal choices. If you’ve chosen to be unarmed, you want to hear news items that validate that choice. If a health professional tells you that keeping or bearing arms makes you less safe in your home and on the street, you will have an intrinsic bias toward believing them.

If a politician proposes that restrictions be placed on gun owners and gun buyers, that makes perfect sense to you. You don’t own a gun or intend to buy a gun, so these proposals are perceived to be without personal cost. The only costs are born by the people who have chosen to own firearms. People, by nature, are willing to impose costs on other people, if they don’t have to pay anything themselves.

Any restriction on people being armed will appear to be a positive. The fewer armed people those who are unarmed have to contend with, the better. It doesn’t matter how useless or senseless the restriction, how draconian, how expensive, how ineffective it may be. The deliberately unarmed perceive the personal costs to be zero. Fewer guns, less fear of an imbalance of power on their part.

If you have chosen to be unarmed, you probably don’t have much knowledge about firearms and how they work.  Learning and knowing about guns is one of the costs that people avoid by choosing to be unarmed. When gun owners point out technical mistakes in articles and legislation concerning guns, it strikes the unarmed as meaningless, pedantic babble. Semi-automatic, automatic…who cares? You are not interested in guns, so technical distinctions are beside the point.

That explains the arguments put forward that claims crime in big cities really isn’t a problem, the government could never become tyrannical, the danger posed by wild animals is minimal and government is often ineffective during emergencies. It explains why so much effort is expended to hide or discredit the millions of times firearms are used for self defense and to prevent crime.

The decision to be unarmed depends on a perceived high cost of being armed, and perceived low benefits to being armed. Every successful example of a defensive gun use works against that perception. Hence, the frequent ridiculous arguments such as the “right to feel safe” denigrating gun owners as “ammosexuals” and bigots.

Much of the propaganda from those who want a disarmed population is aimed at creating the impression that armed citizens present a net cost, rather than a net benefit.

Several methods to counter the mind-set of the deliberately unarmed can be effective. All work to show benefits of being armed (or allowing others to be armed) and the costs to those who choose not to own guns.

One of the strongest is to convince deliberately unarmed people that having armed citizens makes them safer. That they use their firearms millions of times a year to prevent crimes, frequently resulting in criminals behind bars. They need to know that legally armed citizens are not a threat, but actually prevent crimes that threaten them.

People who obtain carry permits have been shown to be more law abiding than police officers. They have stopped numerous crimes and yes, even some mass shootings. They have saved police officers’ lives. This information supports the idea that armed citizens are a significant benefit to society and protectors of unarmed people. They are assets, rather than a danger. Being polite and reasonable during personal or Internet discussions helps to promote this thought.

Showing unarmed people that being armed might be useful in the future gives them an incentive to keep their options open. The key is to educate them about problems that being armed can reduce or solve. This should be done in a non-threatening way. Giving them examples of individuals who used firearms to defend themselves or their loved ones can be very effective. Explain that these stories are routinely spiked by the national media.

The desire to be armed is virtually genetic. Something as simple as watching a movie in which being armed makes a positive difference connects deeply with people at a very basic level.

Another approach is to show them that disarming the population isn’t cost-free. It’s worthwhile to remind them that there are over 400 million private firearms in the United States. Those who want the population disarmed often attempt to minimize that and what it would entail to — in terms of cost and potential violence — to seize those guns.

If people who wish to disarm the population realize there can be severe personal and societal costs to disarming a population, it changes the cost-benefit analysis significantly.

A fourth tactic is to talk about the futility of disarming a population like that of the US. Do this by showing how simple it is to evade those restrictions. Show how easy guns are to make, how tribesmen with little technology make guns with ease; how criminals in places with very strict gun control still have access to guns and ammunition; how hobbyists routinely make guns and ammunition; how gun technology is really a 14th century technology. It’s hard for those who wish to see the population disarmed to argue physics and engineering.

The gun culture has the Constitution, facts, physics, and basic human nature on its side. It’s only when the information flow about these is suppressed that those who wish the population disarmed win. That’s why restrictions on gun ownership and their use are often rushed through legislatures. It’s why those opposing the Second Amendment also tend to oppose First Amendment rights. If deliberate thought and careful argument and analysis take place, Second Amendment supporters tend to win.

Previous article: Do You Remember The First Day You Carried Your Firearm In Public? Here's How Mine Went. Next article: *WATCH* Pizza Shop Employee Attacked By Man In Clown Mask, Shoots And Kills Him In Self-Defense