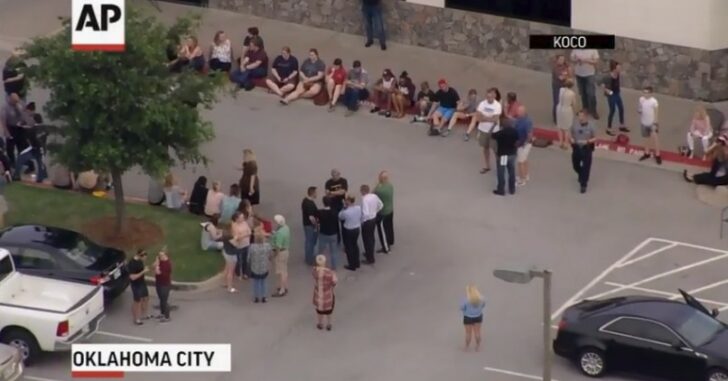 Yesterday around 6:30 pm local time, a man with a handgun went into a restaurant and opened fire randomly, injuring three people in the process. It was originally reported that the gunman was shot and killed by an armed citizen. While that was true, the final story tells us more.

It was actually two armed citizens that stopped the gunman.

“I just did what needed to be done to stop the threat. Nothing special,” Whittle told USA TODAY. “A lot of people would have done the same given the situation.”

After realizing what was happening, the two armed citizens ran out to their vehicles to retrieve their firearms. Then when the suspect was outside, they fired. He died as a result.

The injured were Natalie Giles, 39, her 12-year-old daughter and another child inside the restaurant.

The attack seemed completely random, as the gunman did not know anyone inside the restaurant and had never worked there. He had contact with police in 2003 when he was arrested for domestic battery.

In the aftermath, police found videos posted online from the gunman that documented his life, as well as discussing “what he believed to be the devil following him. He talks about feeling stressed and demons that are continuing to haunt and attack him.”

It is not clear whether he was seeking mental health treatment, but it seems clear that he was in need of some help.

Oklahoma City Police gave a detailed account of all parties involved, as well as what transpired that evening on their Twitter page:

May 25, 2018 / 9:19 am: Official news release regarding last night’s shooting at Lake Hefner. Press conference will be carried live on our Facebook page at 11:30 this morning. pic.twitter.com/i06ytafSlz

It is not clear why the armed citizens had their firearms inside their vehicles and not on them at the time, but this is a curiosity question from myself more than anything. Both handguns were said to be locked inside the trunk of their respective owners’ vehicles. In the end, they definitely saved lives, and we applaud their quick response to a dangerous and deadly situation.

It is possible that they did not have permits to carry concealed or open and that is why the firearms were inside their vehicles, and it highlights a decision made by the Governor of Oklahoma just weeks ago to veto a bill that would allow constitutional carry in the state.

After consideration, Gov. Mary Fallin said that while she is pro-2nd Amendment, she feels that the current laws for concealed and open carry are adequate and working.

“I believe the firearms laws we currently have in place are effective, appropriate and minimal,” she said. But she added that the bill would have eliminated the requirement for a training course and reduced the level of background checks to carry a gun.

Currently, a license is required in the state to carry both open and concealed. The department which issues these permits mentioned that if the bill were passed, they would lose $4.7 Million and 60 full time jobs as a result.