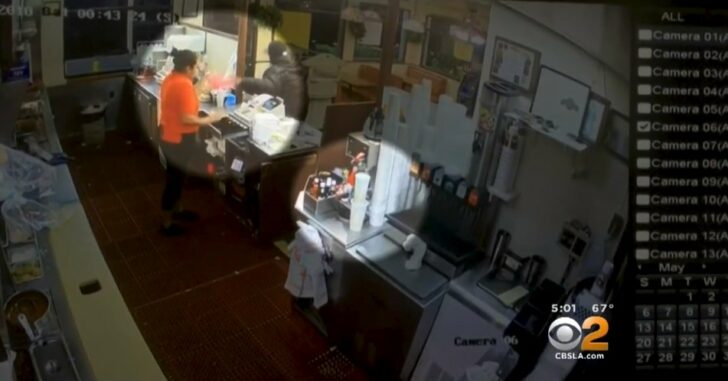 SANTA ANA, CALIFORNIA — A man walked into a restaurant and began to rob a cashier at gunpoint, and the most unexpected thing happened that surprised everyone.

The cashier begins to fill a bag with with money as the robber holds the gun on her. Then, SURPRISE!

Filled with video cameras, the incident was captured on tape. Take a look below and then keep reading below…

The robber takes the bag and that’s when bullets start to fly. If you watched the video above, you’ll know that a man and woman were in the drive-thru at the time of the robbery and were waiting for their food. That’s where the shots came from, as it seems that the man in the vehicle fired on the robber.

After firing (and hitting the robber twice), the man takes off in his vehicle. The big question here is; why? If he was simply trying to help, why would he drive off after firing the shots? I have some theories:

It could be one of those or something completely different. Until they find the car and the driver, these questions will likely go unanswered.

It was a bold move, however, to fire inside the store from the drive-thru. While he may have had a clear view of what was going on, it seems that there was some risk involved as far as accidentally hitting someone else. There were at least a few people in close proximity to the robber, and that’s a chance that should only be taken if the shot looks solid, IMO.

The robber, shot twice, was found not far away by police and was taken to the hospital. He is expected to survive.

If we find more information on this story, we will update it here.

Previous article: Do You Remember The First Day You Carried Your Firearm In Public? Here's How Mine Went. Next article: *WATCH* Pizza Shop Employee Attacked By Man In Clown Mask, Shoots And Kills Him In Self-Defense