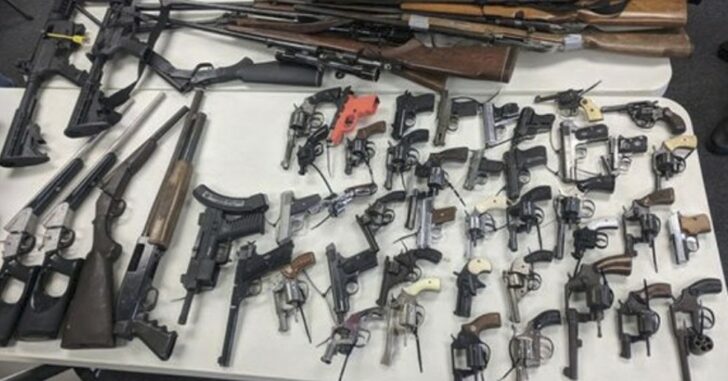 The image above is of the 73 firearms turned in a week ago in Montgomery, Alabama.  While there are lots of inexpensive firearms on the table, there are some classic and expensive collector items as well.

I see a Hi-Standard Model B .22, a Beretta pocket pistol, a Smith & Wesson Victory pistol, and a Colt pocket auto .32. One of the “assault weapons” taken off the street is a Mossberg715T, which is a straight blowback .22, dressed in a plastic AR-looking shell.

CrimeStoppers’ Gun Buy Back program paid people $100 for assault weapons and $50 for pistols.

“We’ve had everything from AR-15’s to 22 pistols, shotguns, some are guns that people want to get ride of because they had younger kids around the house,” says Garrett.

67 guns were turned in during last year’s 2 hour gun buy back. Serial numbers of the guns they are buying back so see if the gun was used in a crime.

Organizers of these events have become conflicted about how much they advertise them. If the events become well-known, private parties show up to purchase the valuable guns outside, benefiting all concerned, but destroying the propaganda message “buy back.” I didn’t see any coverage of private purchasers at this event, which is likely why so many valuable guns were turned in for so little in recompense.

Almost all of these guns were turned in by people who know nothing about guns and likely inherited them. But they believe the “guns off the street” propaganda and turn in $500 – $1,000 guns for $50.

Tony Garrett, executive director of CrimeStoppers said most of the guns were from “residents who were not gun users and feared that the gun created an unnecessary risk around their children and/or could be used illegally if the gun(s) were stolen out of their home.”

Garrett said the next gun buyback event will be held June 29, 2019.

Second Amendment activists near Montgomery can mark their calendars for next year’s event to be held on June 29th. At least one person in Alabama is paying attention.

From al.com in the comments:

How much did they pay for each gun? Next time they do this I’ll set up a stand next to theirs and offer five dollars more for each gun that I accept. Of course I reserve the right not to buy rusty junk–which is what usually is brought to these buybacks.

If private parties had been there, it’s hard to believe they wouldn’t have paid a couple of hundred dollars for that AR clone, the Smith & Wesson model 60, the classic Colt pocket .32, or the pre-64 30-06.

The research on these events show the police resources are better used to fight crime.

From the Freakonomics web site:

When it comes to gun buybacks, both the theory and the data could not be clearer in showing that they don’t work. The only guns that get turned in are ones that people put little value on anyway. There is no impact on crime. On the positive side, the “cash for clunkers” program is more attractive than the gun buyback program because, as long as they are being driven, old cars pollute, whereas old guns just sit there.

Having private purchasers show up at these events is cheap activism for Second Amendment supporters, not to mention a good bargain hunting opportunity. It shows that guns are valued assets for many people in the community.