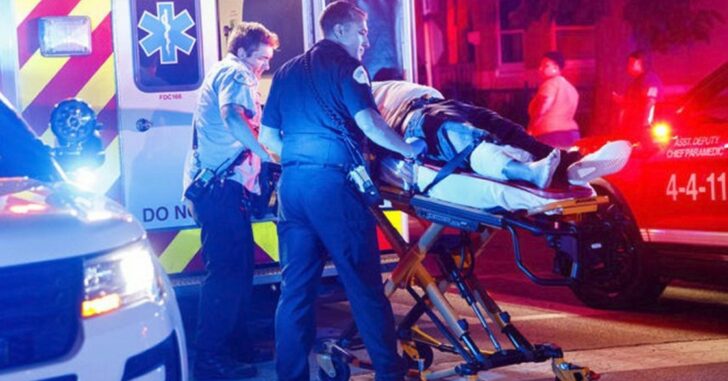 By John Boch via TTAG

America’s murder capital, Chicago, has a new claim to fame.  RentHop cited a huge jump in rat complaints from Rahm’s residents in naming the Windy City “Rat Capital” of America.  Meanwhile, Chicago crime continues unabated.  While good people enjoyed a mild weekend, the bad guys plied their trade.  In the end, the body count came in at 8 dead and 48 wounded.

At 9:30 Saturday evening, four suspects rolled up to the Nancy Jefferson Park at 3115 W. Fulton in the Garfield Park neighborhood.  Their sedan matching the description of a vehicle carjacked nearby just hours earlier.  In that incident, the Caucasion female driver begged and pleaded with a pair of suspects to let her keep her toddler in a car seat in the back.

Initially, in the din of bass-enhanced music blasting, nobody noticed the car pull up.  When the suspects emerged, they opened fire on a group of gang members and their coterie at the park.  Minutes later, law enforcement found scores of empty shell casings and a whole lot of blood. The Chicago Tribune had parts of the story of the park incident and other violent crime.

…The shooting into a group gathered around a park bench in the East Garfield Park neighborhood left at least one man dead and six wounded Saturday night, according to Chicago police. They were among at least 20 people shot in Chicago from Saturday to Sunday, four fatally, including five attacks in which two or more people were shot.

Six of the men were taken to Stroger Hospital following the shooting shortly after 9:35 p.m. Saturday, and one was pronounced dead at the hospital, police said. The seventh man showed up at Mount Sinai Hospital.

Dozens gathered at Stroger, spilling out of the waiting room and standing in the parking lot.

Many had driven from the crime scene in the 3100 block of West Fulton Street, which surrounded Nancy Jefferson Park and stretched far down the block from Walnut Street — where police initially reported the shooting had taken place — north on Albany Avenue and west on Fulton Street, the northern border of the park.

At the same time, the Tribune left out significant pieces of the story and barely mentioned the real story.  One short sentence in a paragraph buried in the story told the true nature of the conflict.

Two street gangs, the Black Souls and the Gangster Disciples, have a conflict in the area.

Once more, we see that “gun violence” really means gang violence.  After all, guns don’t shoot themselves.

Meanwhile, Second City Cop filled in some details not found in the mainstream media’s reporting:

Fun Fact #1! Six of the seven shot have SSL (strategic subject list) scores in excess of 300. Anything over 250 means your odds of getting shot are better than 2-to-1.

In other words, all but one of the wounded do not spend their Sunday mornings working as choir boys at their local churches.

Chicago has a violent crime problem.  The entire state of Illinois reported 1157 homicides in 2016, 70% of which (808) happened in Mayor Rahm Emanuel’s City of Chicago.  While the south side of Chicago sees a great deal of violence, the west side does its part to keep up.  And Chicago crime impacts every neighborhood.

While Americans don’t like the gang violence that infest America’s inner cities, they don’t lose a lot of sleep over it.  Americans know that soft-on-crime prosecutors and judges keep the vicious cycle alive.  Along with social policies promoted by deep blue politicians.