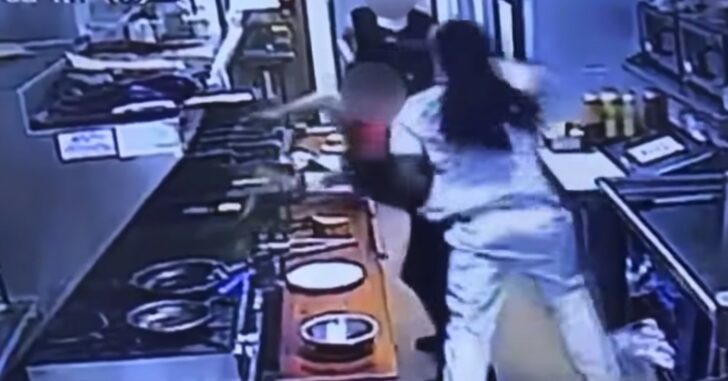 MILWAUKEE, WISCONSIN — A worker at a George Webb restaurant suffered a concussion after being punched in the head by a customer on June 29th. The incident was captured on surveillance video, and could have been much worse had a co-worker not stepped in with her firearm.

The employee that was attacked told TODAY’S TMJ4 the other worker has a concealed carry permit, and their boss allows them to carry a gun for their protection if they are licensed to do so. Alderman Bob Donovan, who made the footage public, said, “It’s so frustrating to me as an elected official that the other waitress felt it so important that she arm herself to come and work in my aldermanic district. Yet, I thank God she was armed. Otherwise, I shudder to think what may have happened to those two women.”

As you can see in the video above, the woman with the firearm was quick to draw from her pocket, and it changed the attacker’s attitude very quickly. One comment on the video that I couldn’t help to chuckle at;

Indeed, his attitude changes quickly once faced with an armed citizen. According to police, the attacker is known to them and has a history of being a drug dealer and abuse. He has not yet been apprehended by police, but they are actively searching for him. I was not familiar with the George Webb restaurant chain prior to learning about this incident, but it’s nice to see that the franchisee at this particular location is keen on his or her employees carrying at work. Remember: Carry at work, because an angry and violent person could be just steps away.
Categories: CCW In Action, General, Guns Saving Lives, News

Previous article: Man Steals Car And Wildly Shoots Out Window At Other Vehicles Is Stopped By Armed Camper Next article: Report: Civilians Bought More Guns in the Last 2 Months Than the Military Has In Total