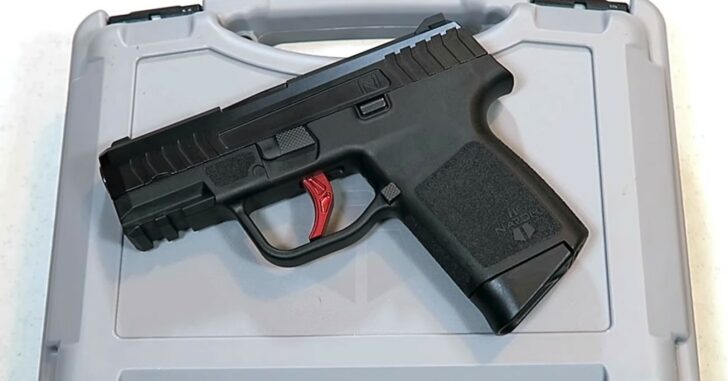 Naroh Arms just released their new pistol to the market called the N1. The Naroh Arms N1 is a sub-compact 9mm handgun that carries seven rounds. It shares the look between a Glock 43 (original) and a Sig P365 however when we look closer at its features, it’s clear the N1 is its own entity.

The Naroh Arms N1 is a hammer-fired pistol with a double action trigger that I measure at 6.75 pounds. It offers a heavy but smooth trigger pull that would suit pocket carriers just fine. There is no over-travel upon the trigger break. The trigger itself is an aluminum skeletonized bright red trigger. The N1 branded red trigger reminds me of the Walther Q5 Matches blue trigger. There is just something about the color that brands the pistol according to it’s manufacturer that helps it stand out from the crowd.

The N1 trigger resets at full position. The shooter will notice two clicks upon the reset. The first click is the firing pin resetting and the second click is the trigger reset. Having plenty of experience with Kahr Arms double action trigger pulls, heavier triggers is nothing new to me. I look forward to range time with the Naroh Arms N1. I believe the trigger action will be smooth and crisp when live firing.

The glass-filled polymer grip resembles the same look and texturing as a Sig P365. The grip stippling is gritty like sandpaper but not overly aggressive for the IWB carrier. I see no need to add grip tape or a rubber sleeve to the grip. The same stippling is placed on the left side of the frame where the weak side thumb is positioned for a right handed shooter. It is also on the right side of the frame for a “finger off the trigger” rest. The Naroh Arms logo is imprinted on the bottom of the grip.

The N1 ships with two magazines that each carry seven rounds of 9mm. Its a single insertion that bows out to a staggered stack magazine much like the M&P Shield. One magazine has an extended base-plate for three finger contact and the other has a flat base-plate. The magazines have sight holes on the left side and drop free when released. They also use a red polymer follower that I like opposed to the yellow or orange followers that many manufacturers are using these days.  Personally, I prefer the extended base-plate mag but I wish it added additional rounds making it possibly a 10 round magazine. I am told that Naroh Arms is working on higher capacity magazines to fit the N1.

The Naroh Arms N1 is extremely lightweight compared to other sub-compact 9mm handguns in the same class. The unloaded weight is 16.5 ounces with an empty magazine. The loaded weight with seven rounds of 9mm is just a touch over 19 ounces. When comparing the N1 to the M&P Shield, the N1’s slide and grip is shorter and it weighs four ounces lighter when loaded with seven rounds. The N1 is even two ounces lighter than the Kahr P9 with the 3.5” barrel.

The Naroh Arms N1 has forward and rear slide serrations along with additional slide cuts on the top and side of the slide. It has a two slot picatinny rail on the dust cover to attach a light and/or laser and three dot sights. The sights are compatible to the Glock 43 which allows the shooter to easily find and add night sights to the N1.

The most impressive feature to me is the slide to frame fit and finish. The slide and frame fit together in perfect “CZ ish” harmony. Charging the slide action feels as smooth as glass. The internal chassis in aluminum with longer than average frame rails that create an incredible fit with the slide. The frame itself is built quite strong in the forend but Naroh Arms somehow was able to keep the weight down while adding frame strength.

Disassembling the Naroh Arms N1 is simple. Once assuring the pistol is unloaded, the slide needs to be locked back. The takedown lever needs to be pushed 90 degrees to unlock and remove the slide. There is no reason to pull the trigger in the disassembly process. Internally, there are two uncaptured recoil springs and a polymer guide rod. Simply remove the 3.1 inch barrel and the disassembly process is complete. To reassemble, follow the same steps in the opposite order.

The MSRP for the Naroh Arms N1 is $399 but I believe the average local gun store price will be around $360. It ships in a padded hard case with the pistol, two magazines, a cable lock and the paperwork.

I think that Naroh Arms came out of the gate with a cool little pistol. In my opinion, it will sell well because of its favorable features and the fair (under $400) price tag. Yes, they are joining a crowded market of sub-compact 9mm handguns however the handgun world is large. Shooters are always looking at small pistols for deep concealment. The key point will be the reliability and longevity of the N1. If Naroh Arms can provide customer service as well as they can provide a superb fit handgun, the N1 is here to stay.

Previous article: [VIDEO] Uniformed Cop Nearly Gunned Down by Security Guard in Gun-Free Zone Next article: [VIDEO] Criminals Don't Think Like You Do. Keep This In Mind When Carrying A Firearm.