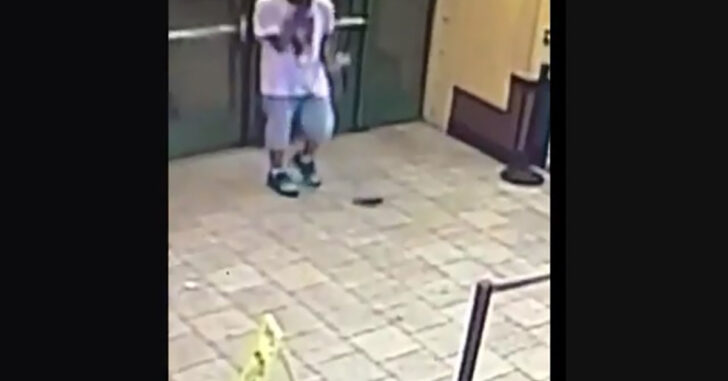 CONEY ISLAND, NEW YORK — While stopping to get some snacks, three officers heard something hit the ground. It was a handgun that had just fallen out of someone’s waistband.

The ex-con and felon who dropped it had not even noticed.

The bumbling perp, identified by sources as 34-year-old Emmanuel Lovett, seems to be adjusting his pants as he strolls into the donut shop on Saturday at around 11:30 p.m. — and doesn’t appear to notice the loaded weapon falling to the ground.

A pair of cops can be seen rushing toward the unlucky ex-con and putting him in handcuffs, while the third picks up the gun.

Coney Island, which is a part of New York City, has very strict regulations in place as to who can and cannot carry a firearm. To make it easy, here is a list of people who can carry a firearm:

Police sprung into action quickly, and too the repeat criminal into custody.

3 of our cops are in the local Dunkin/Baskin Robbins. A fella walks in, adjusts his pants & out drops a loaded gun on the floor. Now the repeat felon carrying it is in custody, all because a Transit cop had a craving for cake batter ice cream🍦 (seriously, this actually happened) pic.twitter.com/9Ue6IHQi2g

It doesn’t seem that Lovett was looking to rob the location, but that’s just a guess. It just seems that he carries (carried) it around with him for protection.

Either way, it would seem that all the gun laws on the books couldn’t deter this man from doing illegal things. Maybe another law?