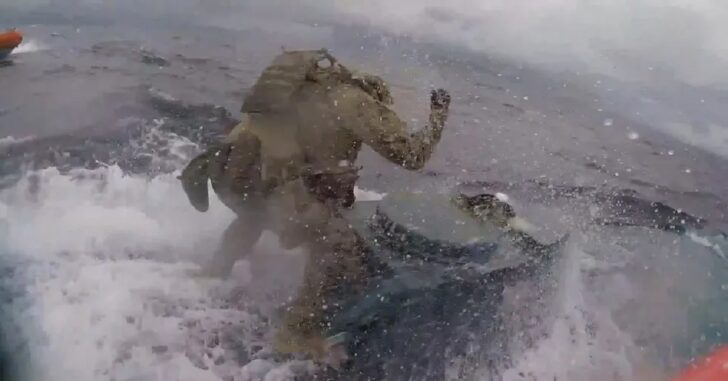 The Coast Guard tends to get a lot of crap about not being as “in the action” as other branches. While they may not spend as much time doing the flashy stuff that makes the news, that’s also incredibly unfair.

They’re responsible for ice breaking, coastal defense, and a lot of the war against drugs in these United States, among other things. As the video below shows, sometimes combating drug runners is just as spectacular as any other highlight reel.

That pursuit would end with a couple of royally pissed-off Coasties deciding to stop the sub by committing an honest-to-goodness boarding action.

The Coast Guardsmen pull right up to the sub, hop right on top of it, and bang so hard on the top that the crew inside opens up and surrenders.

Personally, I have absolutely no idea why the sub driver doesn’t just plunge beneath the waves, but at the same time my kowledge of submarines is limited to a pair of documentaries and “The Hunt for Red October.” There’s likely a reason I don’t understand.

Whatever the reason, I for one am elated that these Coasties were able to stay on the boat, accomplish their objective, and give the drug trade a big ol’ punch in the teeth.

Previous article: [VIDEO] Criminals Don't Think Like You Do. Keep This In Mind When Carrying A Firearm. Next article: Son Shoots And Kills Man Who Broke Into Home And Began Stabbing His Father