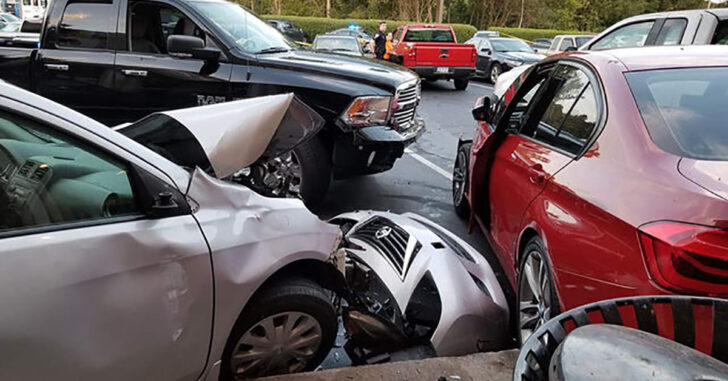 FORT MILL, SOUTH CAROLINA — A concealed carrier was witness to a man repeatedly driving into multiple cars in a parking lot, and he took action to try and stop the man from continuing and potentially killing someone.

The moves he made, however effective, are not recommended behavior.

Witnesses said the suspect got in his black truck and continuously slammed into three to four cars. He was stopped by one of the drivers, who was carrying a gun. The man with the gun allegedly hit the suspect in the head with the weapon.

“I thought he shot him, but he had pistol-whipped the fellow and that’s what made the gun go off,” said witness John Simpson.

During the incident, a man was trapped under one of the cars. This is all grounds for lawful self-defense. The armed citizen then held the man at gunpoint until police arrived.

The armed citizen isn’t facing any charges, but it’s only fair and responsible to take a closer look at what went down.

I can see the thought process: “I don’t want to shoot this man, but I do want to stop him.”

Problem: ANYTIME you draw your firearm, you have to be absolutely prepared to pull the trigger. Drawing it in hopes of stopping the person, then failing to do so and instead hitting him in the head with your firearm, is not a good practice.

Moreover, it would seem that during the pistol-whipping, the trigger was pulled. That’s bad, but I don’t have to tell you that. What if someone in the area had caught that bullet? Then what?

At the end of the day, this armed citizen successfully stopped the suspect, but overall in a bad way.

What’s your take on this incident?

Previous article: Colt Suspends Production Of AR-15 For Civilians Next article: [VIDEO] Man Successfully Defends Home With AR-15 After His Door Is Violently Kicked In