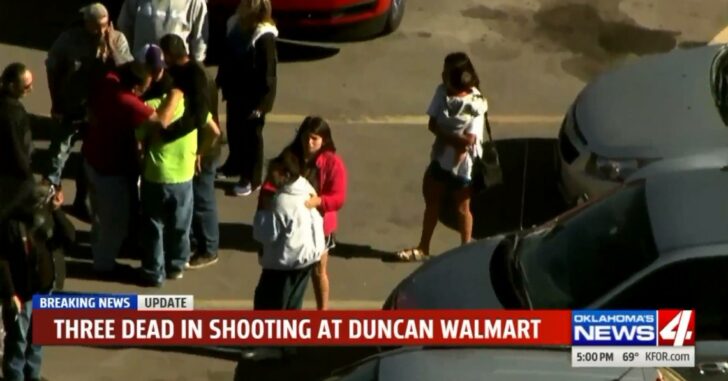 DUNCAN, OKLAHOMA — A shooting incident occurred in a Walmart parking lot this morning where a man and woman were shot and killed as they sat inside a vehicle.

Immediately after, it is reported that an armed citizen, who was in the immediate area, drew his gun and put it to the head of the suspect and told him to stop shooting.

Duncan resident Aaron Helton, an Army veteran, said he was at the Walmart at about 9:45 a.m. local time when he heard nine shots and saw the gunman, gun in hand. Another man walked up, put a pistol to the gunman’s head and told him to stop shooting, Helton said.

The witness said that following this, the suspect put his gun to his head and fired, although police haven’t yet confirmed this information.

While police haven’t yet commented on any motive, a spokesperson for Walmart stated that the incident was isolated.

Walmart spokesman Payton McCormick told USA TODAY that no staff members were involved in the shooting or injured, and the store was not evacuated.

“This was an isolated incident in the parking lot and was not an active shooter situation,” McCormick said.

While the incident may have been a domestic incident, we’ll be unsure as to whether or not the suspect was planning to do harm to others. His plan all along may have been to end his life, and we’ll never know what influence the armed citizen actually had with the outcome of events.

The suspect’s identity has not been made public, however at least one person knew the suspect and spoke with reporters.

“He is an avid family man. A community person. Very well known in the community. Does all he can for the community and his family,” [Michael] Bryant said.

Bryant cannot understand what drove the suspect to do what he did, calling his actions completely out of character.

“I understand anger, separation. I`ve gone through it. I`m sure all of us have witnessed it at some point but it`s not one of the things you ever expect,” Bryant told reporters.