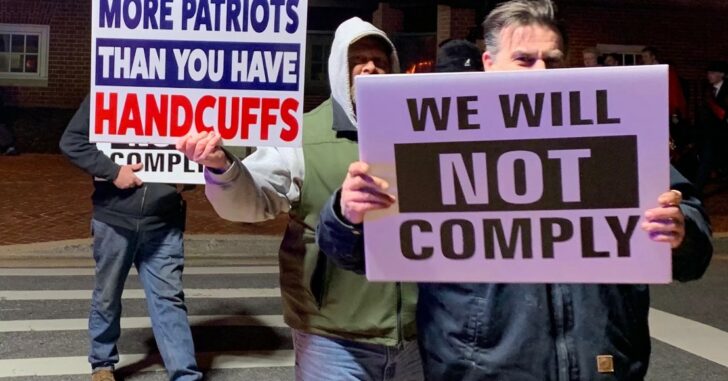 By CCRKBA via TTAG

The Citizens Committee for the Right to Keep and Bear Arms today said Virginia state lawmakers who threaten to withhold state funds from “Second Amendment Sanctuary” counties that refuse to enforce gun control laws that pass in Richmond are “practicing world-class hypocrisy.”

“After weeks of rhetoric about alleged ‘quid pro quo’ efforts by President Donald Trump to force the Ukraine government to investigate a political rival or risk losing U.S. aid, it is dumbfounding that a Virginia lawmaker would suggest essentially the same thing,” said CCRKBA Chairman Alan Gottlieb. “The hypocrisy is stunning.”

The Washington Examiner reported that Democratic Virginia Rep. Donald McEachin “suggested cutting off state funds to counties that do not comply with any gun control measures that pass in Richmond.”

“Anti-gun Democrats can call that anything they want,” Gottlieb observed, “but it equates to the kind of political blackmail their Capitol Hill colleagues have accused Trump of committing. Apparently, strong-arm coercion is okay so long as it’s a Democrat who’s doing it.”

“These anti-rights extremists aren’t even trying to disguise their intentions anymore,” Gottlieb stated. “What was once the party of gun control has become the party of gun confiscation and social bigotry. Where they were once apprehensive about gun control, now they are arrogant. They despise gun owners and they’re determined to reduce a constitutional right to a heavily-regulated privilege. They will punish anyone who stands in their way.”

“The saddest part of this,” Gottlieb concluded, “is that nobody should really be surprised. When anti-rights extremism replaces sensible governing, diplomacy gives way to demagoguery and nobody benefits.”

With more than 650,000 members and supporters nationwide, the Citizens Committee for the Right to Keep and Bear Arms (www.ccrkba.org) is one of the nation’s premier gun rights organizations. As a non-profit organization, the Citizens Committee is dedicated to preserving firearms freedoms through active lobbying of elected officials and facilitating grass-roots organization of gun rights activists in local communities throughout the United States.