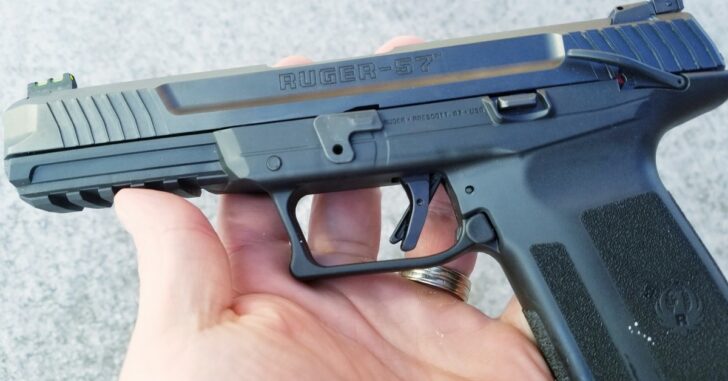 With no countdown, anticipation or intentional leaks, Ruger released a new handgun called the Ruger-57. The Ruger-57 is chambered in 5.7x28mm which is a high velocity bottle-neck round. It is most commonly known as the round used in the FN P90 and FN FiveseveN firearms. A couple other smaller manufacturers created guns in the 5.7x28mm chambering however the round never really took off in popularity. This was primarily because the firearms and ammunition was too expensive. Shooters knew that venturing into the 5.7x28mm world would be costly despite the powerful ballistics and low recoil.

This year, the Ruger-57 jumped headfirst into the 5.7x28mm world. It’s a full-size pistol with steel magazines that carry 20 rounds. Using the popular grip texturing on the Ruger Security-9, the grip is comfortable and firm. The slide has forward serrations, an ambidextrous (1911 like) thumb safety and a front fiber optic green sight. The black serrated rear sight is adjustable for elevation and windage. The barrel length is 4.94 inches and it’s action is a delayed blowback system. Add to it a lightening cut on top of the slide along with a full picatinny rail on the dust cover, the Ruger-57 is a feature-loaded pistol.

The Ruger-57 is an internal hammer-fired pistol with a single action trigger. It’s a flat face trigger with a trigger bar safety. I measure the trigger pull at 4.5 pounds. I consider the audible reset position to be average. It’s not very short but it also doesn’t reset to full position but in the middle. As mentioned the two 20 round magazines are made of steel. They are double stack mags that load similar to rifle magazines. Simply pushing the rounds into the magazine instead of sliding them in is an easy process. The shooter can easily load 20 rounds without breaking their thumb. To put this into perspective, two loaded magazines will equal 40 rounds of 5.7x28mm firepower. 10 round magazines are offered for the states that have magazine capacity restrictions.

Meeting the demands of many of today’s shooters, the Ruger-57 is optic ready. Ruger offers a plate in the case. They state that they have individual plates for specific optics available on their site. Realizing that shooters prefer certain red dot optics over others, Ruger is attempting to accommodate the people’s personal preferences.

Let’s get down to the nitty gritty, the price. The MSRP for the Ruger-57 is $799. Compared to the FN FiveseveN handgun, that’s between a $500 – $600 savings. The FN FiveseveN sells between $1200 – $1400 brand new. Understanding Ruger and how they operate with the cost of their guns, the price will drop dramatically over time. I would guess within six months the Ruger-57 will have a street price around $640. I also believe the cost of the 5.7x28mm ammunition will eventually decrease as well. Now that Ruger is “in the game” other manufacturers may jump on the 5.7x28mm ship. If the popularity of this gun is any indication, I think the competition will be good for the consumers.

Available in CA: No

Available in MA: No

Disassembling the Ruger-57 is a simple process that requires no tools. Lock the slide back and push the button on the right side of the pistol to release the opposite side lever. Turn the lever on the left side downward. Release the slide and pull upward to lift the upper off of the frame. There is no need to pull the trigger. Remove the recoil spring/guide rod and the barrel to complete the process. To reassemble, perform the same steps in reverse order.

I took the Ruger-57 to an indoor range for a function check. I purchased a 50 round box of Federal American Eagle 5.7x28mm 40 grain FMJ for $26. This was my first experience shooting this round from a handgun. After the first few shots the low recoil impulse was noticeable. It was smooth and easy to shoot. It had a strong muzzle flash but staying on target was simple due to light forward movement of the pistol. It was also very loud but and light at the same time. As for the function test, it ran 100%. I look forward to a more detailed shooting experience at my outdoor range.

Check out the video (above) and let us know your thoughts on the new Ruger-57. Do you feel this pistol and round is suitable for self defense or small game hunting?