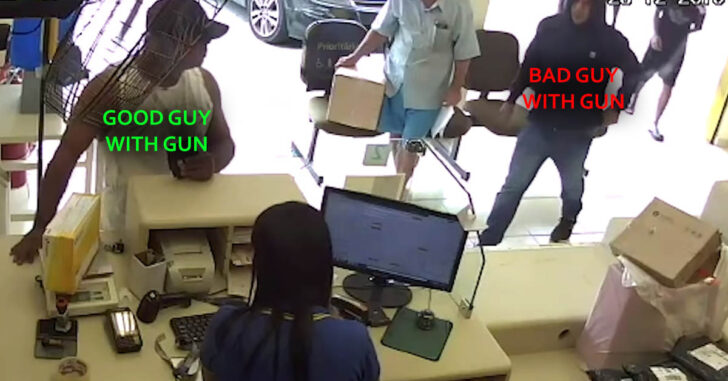 A successful self-defensive gun use is one that stops the threat at hand. In this incident, I’m not quite sure the robber even knew what was happening before he hit the ground.

Happening in Brazil, three men are seen on camera walking into a post office. Two hang back while the other goes up to the counter with a gun in his hand and announces a robbery.

The man standing right next to him on camera, however, is a member of the military and has a concealed firearm in his waistband.

He hesitates for just a few seconds until he sees the opportunity to draw and fire.

The result was three shots to the bad guy’s head, and he goes down in a hurry.

Carla Zambelli, the Federal Deputy in Sao Paulo, shared the surveillance video on Twitter with the following message:

Congratulations to the man for the courage! Four innocent lives saved.

Advice to Burglars: A New Era Begins in Brazil.

Enjoy the wave of growth in the country and look for a job, drop crime and Happy 2020.

While the action only lasts for a few seconds, there is much to take from this video. Our friend John over at Active Self Protection did just that. Give the full run-down video a watch below.