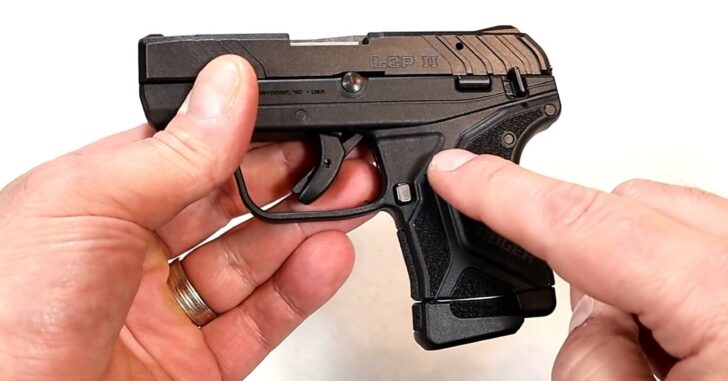 I clearly remember the intense rage about eight years when the Ruger LCP .380 LCP was the hottest pistol on the planet. I watched people outbid each other to pay over $600 at local gun shows. As the concealed carry world expanded throughout the country, shooters wanted that little pocket pistol for easy and comfortable carry.

Ruger eventually took the original LCP and created a LCP II with enhanced features. The LCP II had a shorter and lighter trigger, aggressive grip texturing and the slide locked back with the last round. Sticking to it’s hammer-fired design, the improvements led us to believe the Ruger LCP II hit it’s final stage of development.

In early January, Ruger surprised us when they introduced the Ruger LCP II .22 LR “Lite Rack” handgun. The LCP II .22 models everything shooters enjoy with the Ruger .380 ACP except it’s chambered in .22 LR and has magazines that carry 10 rounds. I doubt anyone would be able to tell the difference between the two pistols at first glance.

Ruger named the LCP II .22 LR a “Lite Rack” due to the light recoil spring weight. When pulling the slide back to charge a round, it is noticeably easy to perform. Ruger uses a single, flexible recoil spring that allows the shooter to rack a round by gripping anywhere on the slide. This is beneficial for seniors, women or anyone who may lack hand strength.

Other features for the Ruger LCP II .22 include a push forward thumb safety, forward slide serrations, fixed “no snag” sights milled into the slide and a 10 round magazine with an extended base plate. The 5.5 pound trigger, 2.75 inch barrel, grip texturing and overall profile of the pistol did not change from the original Ruger LCP II. The only difference I could tell is the magazine baseplate and the slide width is a hair wider at .81 inches.

The Ruger LCP II .22 LR Lite Rack ships with one magazine, a speed loader, a nylon pocket holster (nice touch), along with a lock and the paperwork. The MSRP is $349. I am seeing it available for around $300. Considering the Ruger LCP II .380 model began it’s launch the same way, it eventually sold at gun stores for under $300. I believe the new “Lite Rack” model will follow the same price reduction path over time.

Available in CA: No

Available in MA: No

The disassemble process for the LCP II .22 LR is the same as the LCP II .380 ACP model. Remove the magazine and assure the gun is unloaded. Pull the slide back approximately a quarter inch and with the bottom of a round or a knife, pry the slide pin out of the frame. With no need to pull the trigger, the upper will slide off of the frame. Remove the very small recoil spring and guide rod and the process is complete. To reassemble, complete the same steps in reverse order with one exception. When inserting the pin back into the frame, it should be angled over a visible wire in the frame.

I took the Ruger LCP II .22 LR to the range and was pleasantly surprised at how well I did with it. I felt more in control with the accuracy than I expected. Considering it’s small size, I was able to contact my targets with ease. The overall feel and function was an advantage because of my vast experience with the LCP II .380 ACP model.

Firearms in .22 LR can be ammunition finicky. This is nothing new and the Ruger LCP II .22 LR was no different. With my first function test range visit the LCP II .22 experienced a few light rim strikes when using Federal 40 grain copper plated full metal jacket rounds. The fact that it was a new pistol and the .22 LR can be inconsistent, I wasn’t too concerned.

With my next visit I loaded CCI Mini Mag 40 grain FMJ and Federal AutoMatch 40 grain FMJ. The LCP II .22 did much better. With approximately 100 rounds fired, I experienced one light rim strike. For those who understand the inconsistency of .22 LR rounds, they will know that’s not too bad. The small LCP II pistol needed a couple hundred round break-in period and that made a major difference in terms of reliability.

The Ruger LCP II .22 LR is easy to pocket carry. With the Ruger holster provided in the case, the gun carries so light. With 11 rounds loaded and the thumb safety engaged, the LCP II .22 weighs in at just 12 ounces. I feel the LCP II .22 is a fine pistol once broken in with several rounds fired. For shooters who are recoil sensitive or want a training pistol for the LCP II .380 model, the LCP II .22 LR may be a solid choice.

Check out the videos (above) and let us know if this new Ruger LCP .22 Lite Rack interests you. Share your thoughts and experiences with this or any other Ruger handgun.

Previous article: Paramedic Stabbed At Gas Station While Trying To Break Up Fight, Brings Gun Too Late Next article: Man Shoots At Intruder That Burst Through Door, Intruder Then Uses Baby As Human Shield