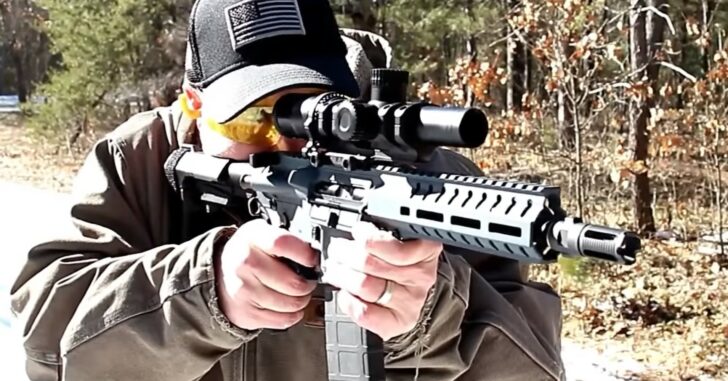 I have been a CMMG fan for a long time. The quality parts and precise craftsmanship makes CMMG among the best manufacturers of rifles, pistols and SBR’s (short barrel rifles) in the industry. Their Banshee line of AR pistols are amazing. Last year, I picked up a CMMG Banshee 300 Mk4 chambered in 300 Blackout. It has an eight inch barrel, ambi controls, a free float aluminum M-LOK handguard, oversized charging handle, a DefCan 3 flash hider, single stage trigger and their patent Micro CQB Rip Brace. The CMMG Rip Brace allows the shooter to pre-set their preferred length of pull and quickly rip the brace to that distance. It’s a huge advantage for quick brace deployment from its shortest form.

At that time, I did not know how versatile a CMMG pistol was. At Shot Show 2020, I learned that CMMG produces upper receivers in 10 different calibers. This allows the shooter to purchase an upper receiver in a caliber of their choice and attach it to their lower unit for an entirely new shooting experience. Best of all, the upper receiver will be shipped directly to their residence which eliminates FFL transfer fees. Big time bonus there.

I decided to get a CMMG upper receiver chambered in 5.7x28mm. This round has seen a resurgence as shooters enjoy it’s high velocity and low recoil. CMMG labeled this upper an “MK57” for the “5.7” round. I was surprised to learn that CMMG produces a whopping 40 round 5.7x28mm magazine. Loading up two mags gives the shooter 80 rounds of intense firepower. In today’s gun world, shooters prefer higher capacity. CMMG delivered with these 40 round mags that performed great. This was another bonus that I didn’t see coming.

I ordered my CMMG Banshee MK57 upper receiver to match my lower with a cerakote color called “slate.” It’s a cross between a blue and grey that looks absolutely beautiful. CMMG offers several cerakote colors but the color “slate” really caught my eye with it’s classy look. The upper receiver I ordered has a five inch threaded barrel and a short M-LOK handguard to match. The firearm is compact and portable. The overall length is just 19 inches in its shortest form. Ripping out the “Rip Brace” will add length however the quick and comfortable shooting was worth it. I added a Bushnell TRS-25 red dot that fit this set-up nicely. CMMG has various barrel lengths, caliber choices and cerakote colors for shooters to create a custom firearm to suit their personality.

CMMG uses a “Radial Delayed Blowback” system with their firearms. This is a mechanical delay that forces the gas pressure from the round into the chamber before the bolt unlocks and moves into the buffer tube. The advantage of the delay is softer shooting which allows the shooter to stay on target easier and longer. It is also nice for competition shooters along with those who are recoil sensitive. I didn’t notice it that much when shooting the light 5.7x28mm but when I fired the Banshee in 300 BLK, the recoil was substantially decreased.

I loaded up a couple magazines (80 rounds) and went to an indoor range to sight in the red dot and function test the Banshee 300 MK57. It was smooth and comfortable. It felt exactly as I expected. Seasoned shooters typically have a good sense when 30 rounds have been fired but the CMMG 40 round magazines felt like a pay raise. When I thought the mag was close to empty, the firepower kept coming until all 40 rounds expired. I truly enjoyed the CMMG 40 round magazines.

I was able to sight in the Bushnell TRS-25 fairly quickly and then shot the Banshee from the furthest distance the indoor range would allow. It was enjoyable but this firearm is begging to be shot outdoors at steel. Perhaps during low light hours of the day to experience the explosive muzzle flash the 5.7 round delivers. The entire package created an exciting shooting experience. I look forward to some outdoor range time with this CMMG Banshee 300 Mk57.

For those who already have an AR pistol lower receiver, ordering this upper in 5.7x28mm (or any of the other nine calibers) couldn’t be easier. CMMG is currently selling this complete upper receiver along with three 40 round magazines for $799. Is this lower/upper combination interesting to you? Watch the video and check out the CMMG Banshee in action. Be sure to comment your thoughts on this firearm or any other CMMG product that you have experienced.

Previous article: Man Negligently Shoots Girlfriend With Stolen Gun While Reaching Into Pocket To Pay For Bill Next article: [VIDEO] Sickening Attack On 15-Year-Old Girl By Group Of Teens On The Streets Of NYC