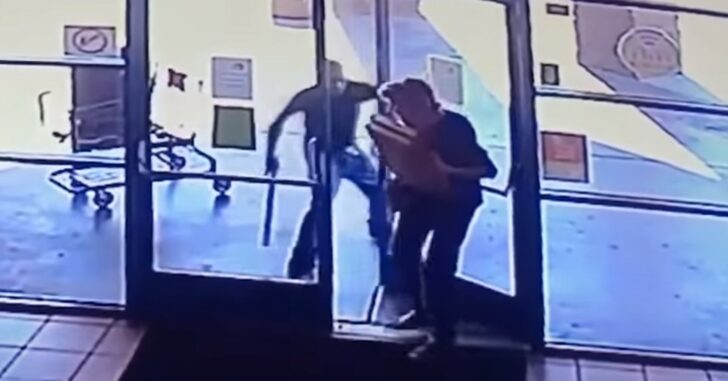 Every once in a while, we’ll see a story or video that gets our anger flowing a little more than usual, and it’s generally the type of situation where the bad guy takes advantage of an elderly person and uses violence.

These criminals exist in our world, and their souls are made of a special kind of evil.

A woman is seen leaving a pizza place with two pizzas in hand. Just outside the door, a man is waiting with some sort of object in his hands, of which looks like a metal pipe.

As the woman goes to open the door to leave, he comes over and seems to help her with the door at first. Obviously, his intentions are nothing but pure evil, as he proceeds to threaten her for the food she’s carrying.

She resists, even if slightly, and that sets the man off and he takes the pipe and strikes her over the head. That’s all she needs to know and she lets go of the boxes and gets away from the man as quickly as she can.

The woman made a recovery after the incident, and we’re happy to hear that she’s alright. Police are still looking for this animal, and our hope is that he’s captured to face charges for this heartless crime.

With this, let’s think about situational awareness. The entrance of this pizza shop gives a clear view of the outside, and being mindful of what lies beyond the doors is important. If we see this man outside and pay close attention, it wouldn’t take long to realize that something doesn’t seem right.

With that information, lingering inside a little longer to access the situation would be a good idea. For this lady, maybe asking for an escort from an employee would be in line as well. Calling the police? Well, if he has a pipe in his hands and is acting funny, that wouldn’t be the worst decision.

Keep that mind sharp, pay attention to your surroundings.

Previous article: Some Gun Owners Are Being Irresponsible Across Social Media, And They Do Not Represent Us Next article: CCX2 S01E14: Open Forum