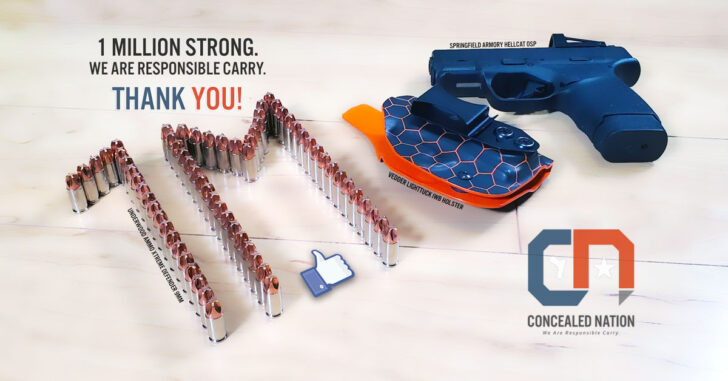 On January 8th of 2013, Concealed Nation was born on Facebook. The same day, I created a website so that I could begin to… well, at the time I wasn’t quite sure. I guess it was to create articles, although I wasn’t a writer. Maybe teach people about concealed carry? I wasn’t an expert.

It doesn’t matter, really, because it began as a simple concept: Promoting responsible concealed carry.

We’re still doing that today, but on a much larger scale. If you asked 2013 me if I think we’d ever see 1,000,000 likes on our Facebook page, I probably would have said something along the lines of, “Yea, maybe with a lot of money and 10 years.”

I figured it would have to die down at some point, and this wasn’t a thing that was going to last. Growth like that isn’t seen without spending some serious advertising dollars, after all.

Instead, the page kept growing, and more and more people were being helped by the information we were putting out. The research never stopped, the articles kept coming out, and we started receiving messages from people who have found our content useful. Sometimes even life-saving.

Then on October 25th of that same year, we reached 100,000 concealed carriers.

And it wasn’t about to stop there. Fast forward to October of 2015, and we managed to bring in half a million likes to the page.

It was a little before that time I had decided to drop my normal gig and convert to full time with Concealed Nation. The transition happened around mid-2015 and I haven’t looked back.

Since then, I’ve made some incredible friends in the industry and have a new respect for what it is to work in this industry. It’s demanding, but it’s fair. It’s frightening, but you’ll meet some of the best people this world has to offer.

We’ve worked with all the major firearm manufacturers in some capacity, and I never thought it’d be possible.

In 2016, we went to our first SHOT Show in Las Vegas. For about 2 years prior, people would ask if I were going. I always said no, not truly understanding the importance of it. When I finally went, it was one of the greatest trips of my life. I met people that I’ve become close friends with, and even met my wife while in Vegas for the convention. That’s a whole other story for a different day.

To the readers: Your drive for knowledge and your determination to be responsible gun owners is what moves our business forward. Your unwavering support for our Second Amendment is felt by all, and each of us knows how closely it needs to be guarded. Just as we see fruitful relationships on the business side, we also see them on the other side of everyday life.

We see readers encouraging others, giving them guidance, answering questions and directing them to resources. This is a huge part of what makes this community so much greater than any other. With this respect and understanding, we can bring in countless other responsible gun owners who share the same thoughts and desires as we do. We don’t turn away. We welcome those who are new, as well as those who have been around firearms their entire lives. We’re all in this together.

To the industry: Thank you for supporting Concealed Nation so early on, and for helping us grow. So many of you have been instrumental in helping us move forward, and we hope that we do the same for you. The friendships, partnerships, and so on, have been things that I wouldn’t trade for anything. This truly is an industry that has each other’s backs, and for better or worse, we stand behind one another.

Previous article: Man Tries Busting Down Door Of Apartment Near Campus, Resident Inside Donates Lead At 1,200 Feet Per Second Next article: 3 Concealed Carry Habits to Stay Out of Jail [VIDEO]