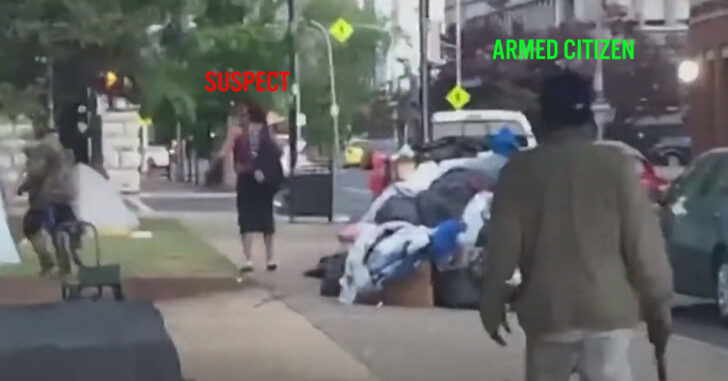 LOUISVILLE, KENTUCKY — A shooting was captured on live video yesterday after a man opened fire on protesters who were gathered at Jefferson Square Park. The gathering at the park has been happening for weeks in protest of Breonna Taylor’s death, who was killed by police during a no-knock raid on her home.

The video captures the suspect, along with at least one person who was armed and paying attention to the suspect’s movements.

One person was reported killed and another injured. It is not yet clear what happened in the aftermath of the first shots being fired, and it is not clear if all of the shots heard on video came from the suspect.

The person killed has been identified as 27-year-old Tyler Gerth.

While most protesters in the park have been largely peaceful. Things changed last night when shots rang out in the park, leaving one dead and one other shot. We are now clearing the park and it will stay cleared.

At the above video’s start, we see a man to the right who seems to be armed with a handgun, watching the suspect’s movements. Witnesses say the suspect is someone who had been kicked out of the protest site numerous times due to his behavior.

The suspect was injured during the incident and sent to the hospital. Some comments by officials hint at an armed citizen being responsible for stopping the suspect, but this has not been confirmed as police continue to work the scene.

This is a developing story. We will be watching this closely to see how things develop.