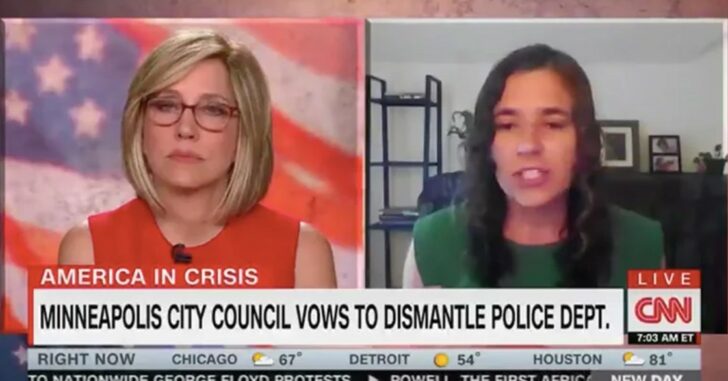 By Dan Zimmerman via TTAG

Minneapolis City Council President Lisa Bender appeared on CNN this morning to discuss the council’s plan to dismantle the city’s police department in the wake of the George Floyd killing. What, you may ask, will replace the MPD? According to Bender, they will construct a “transformative new model of public safety.” Exactly what that means isn’t yet clear.

What was notable about Bender’s comments, though, was her response when CNN talking head Alisyn Camerota asked her what a citizen should do if someone breaks into their home in the middle of the night? Who should they call for help once the local cop shop has been repurposed as a social justice encounter space (or something similar)?

Yes, I mean I hear that loud and clear from a lot of my neighbors. And I know — and myself too — and I know that that comes from a place of privilege. Because for those of us for whom the system is working, I think we need to step back and imagine what it would feel like to already live in that reality where calling the police may mean more harm is done.

CAMEROTA: "What if in the middle of the night my home is broken into. Who do I call?"

BENDER: "Yes, I hear that loud and clear from a lot of my neighbors. And I know — and myself, too, and I know that that comes from a place of privilege." pic.twitter.com/WhubQ9yJIf

In Bender’s calculation, all police need to go because some of them are bad actors. No one should benefit from law enforcement services when those who run the city can’t manage to provide them effectively or equally to everyone.

If the city council makes good on their  promise to get rid of its police force, residents who hear a bump in the night will be left to deal with the problem themselves. No more of these ostentatious displays of privilege like dialing 911. Minneapolitans better make sure they’re tooled up and able to defend themselves from home invaders and other criminals.

The old maxim, “When seconds count, police are just minutes away” will be completely out the window because no one will be coming to help.

How will residents and business owners respond to the knowledge that there’s no one to enforce laws in a de-policed Minneapolis? Those who don’t or can’t move out (this should do wonders for property values) or relocate their businesses will, quite rationally, arm themselves. Self-policing will be the new, more egalitarian standard in the City of Lakes.

Oh, and don’t expect gun stores in and around Minneapolis to be fully stocked any time soon. The run on guns that will result from the promise of an end to local law enforcement will make the coronavirus buying binge look like an average weekday in August. If you don’t already own Ruger, Smith & Wesson or Vista Outdoor stock, now’s the time to buy.

It’s still early days and there’s no word yet as to whether Council President Bender and her starry-eyed colleagues intend to repurpose some of the taxpayer dollars that used to fund the police toward the local coroner’s office. That might be a good idea, though, as there’s likely to be a lot more demand for that city service.

Previous article: Gun Shop Owner Deemed Justified In Shooting Death Of Looter In Philly Next article: Man Drives Towards Crowd Of Protesters, Shoots One, Gets Out Of Car Brandishing Handgun