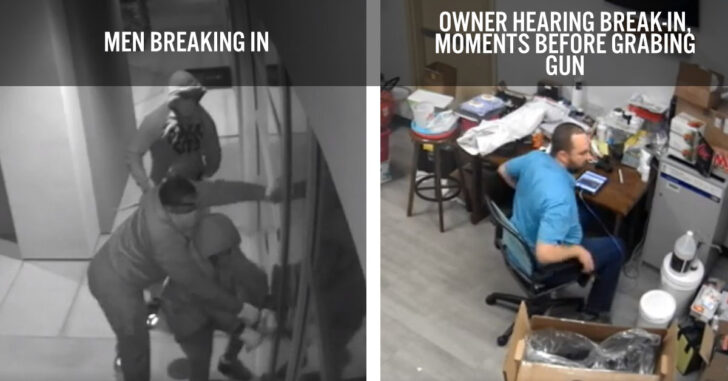 Four men from Southern California were in for a rude awakening when they entered a pharmacy in the early morning hours on Tuesday, only to be met with an alert and armed pharmacy owner.

Shortly before 3:30 a.m. officers responded to Siena’s Pharmacy on Dixie Drive on a reported business burglary and arrived to find a heavily damaged entrance door where the metal frame was bent from being pried open. According to documents filed in support of the arrests of the four men, officers spoke to the owner of the business who provided video surveillance footage of the incident as it unfolded minutes earlier.

The video below shows the men breaking the front door and entering. They weren’t in for long, because owner Steve Kirkland was armed and ready to defend himself and the store.

When the men entered and rounded a corner, Kirkland was there with his gun pointed at them. He yelled loudly at them, and they began to run back through the door they came in. “He has a gun! He has a gun!”, one of them yelled, alerting the others to make sure they were all on the same page that their lives were now in immediate danger.

The only downside here is Kirkland’s execution of the chase. The chase should never happen, but we can see him follow closely behind the robbers as they exit the store. Kirkland goes out the door with a gun in one hand and cell phone in the other. If they were still there, it could have meant the end for Kirkland.

Realize that once the fight is over, meaning the threat has left the building, your job is to get yourself to a safe place and on the phone with 911. That’s it, especially if you’re the only one in the building. Nothing good can ever come from chasing down the bad guys.

We’re glad to hear that no one was injured, and that Kirkland was able to successfully defend himself.

As for the bad guys;

Within minutes, an officer staged near Stucki Family Pharmacy on Telegraph saw a black Ford that matched the description put out by dispatch approaching the parking lot and pulled the vehicle over across from the pharmacy. As the officer approached, Williams said, he noticed there were four men inside, consistent with the information relayed to police, and at that point additional officers were called in to assist.

And that’s a near-perfect scenario.

Previous article: [VIDEO] Couple Points Guns At Protesters As They Walk Past Their Home, Showing Poor Gun Handling Skills Along The Way Next article: Kryptek: Behind the Brand. Watch This Camo In Action!