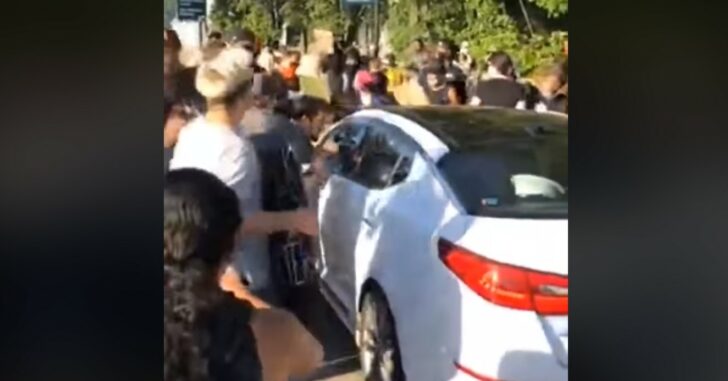 To be justified in the use of deadly force in most locations in the Country, one must have a reasonable belief that his or her life is in immediate danger, or the belief that serious bodily injury could occur. This goes for someone they’d be defending as well.

While the below video occurred roughly 3 weeks ago, we’ve seen cases like this pop up over the last month and everyone always has the same question: Would the driver be justified in using deadly force?

First, let’s take a look at the video:

Yikes. That’s a bad spot for anyone to be in, especially with a kid in the back seat. We can see clearly from the video that only one person became violent with the vehicle, while everyone else seems to just swarm and yell whatever they’re yelling at the driver.

Blocking this person from driving down the highway helped the cause, right? Just checking.

The sticky situation comes up with the topic of self-defense. This could be a case, but it’s never clear-cut. If the driver were able to get out of there –as in floor it– then that’s always the best option. But what if there are people in front of the vehicle? You don’t want to run them over, right?

As far as I’m concerned, they shouldn’t be in front of the vehicle. That’s a risk they’re willing to take. Let’s say, while you’re standing in front of a vehicle to stop it from moving forward, another person takes a skateboard and drives that skateboard through the back window of the vehicle, shattering it. And, let’s say the vehicle had a child inside.

With all of that, a reasonable person would assume that it’d be fair to say the driver may hit the gas without hesitation to get themselves away from the attack that just occurred. Am I wrong?

But lethal defense, such as drawing a firearm. What about that? It’s case-by-case, and probably wouldn’t have been justified in this instance. The driver was able to get away, and one traumatized child later, got out of the danger zone.

What if, however, the attack continued or there were multiple violent attackers? Would the drawing and possibly firing of a firearm be justified? More likely than the actual scenario, probably.

What it comes down to is knowing the laws, and analysing the situation if you’re ever stuck in something such as this. Only you can decide if escalation is necessary to ensure that you and your family go home that day. If you make that determination with sound thinking, it’s probably the right decision.