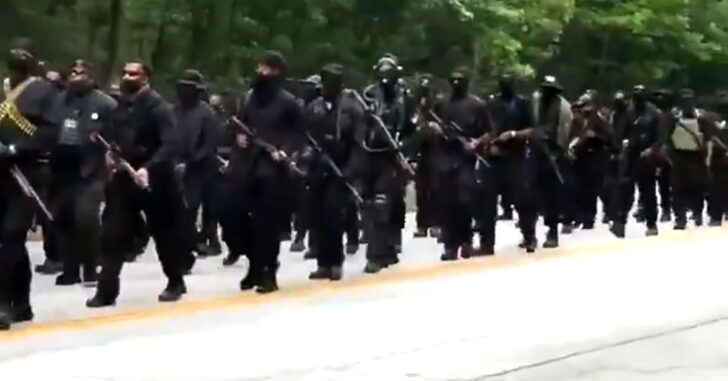 STONE MOUNTAIN, GEORGIA — A group of armed men, calling themselves the NFAC, went on a march in Georgia on the 4th of July to Stone Mountain.

NFAC apparently stands for Not F*cking Around Coalition.

Stone Mountain has long held symbolism for white supremacists. The Ku Klux Klan, a hate group that was formed by Confederate Army veterans and has a history of lynchings and terror against Black people, held its rebirth ceremony atop mountain in 1915 with flaming crosses. Klansmen still hold occasional gatherings in the shadows of the edifice, albeit now met with protesters behind police tape. Many of those cross-burnings took place on or around July 4.

ALERT: The N.F.A.C. leader and the Black militia in Stone Mountain, Georgia is challenging the KKK and white supremacy! All threats to Black life will be met with military force FROM THIS POINT FORWARD!!! #BlackGunsMatter pic.twitter.com/nLs0ONF3un

It is uncertain how long the group has been around, but they’re beginning to get some press with their protests and actions.

A man who calls himself The Official Grand Master Jay (it’s unclear whether this is a nickname or just a social media handle) leads a group called the Not Fucking Around Coalition (NFAC), a black group that he says is compromised of “ex military shooters,” and he’s been using his social media accounts to showcase his group’s armed protests in the wake of Floyd’s death. NFAC previously gathered in the Georgia neighborhood where Ahmaud Arbery was shot and killed by two white residents while unarmed and out jogging.

John Bankhead is a spokesman for the Stone Mountain Memorial Association, and he said the protesters were peaceful and respectful.

“It’s a public park, a state park. We have these protests on both sides of the issue from time to time. We respect people’s First Amendment right,” Bankhead told reporters.

“We understand the sensitivities of the issue here at the park … so we respect that and allow them to come in as long as it’s peaceful, which it has been.”

The protesters wanted to exercise their right to bear arms, and that they did.

“It’s life or death out here, that’s why we’re out here, day by day, practicing our Second Amendment right just like the white folks do,” one protester said, according to Newsweek, and another said, “We want change that’s really going to permanently help us, we don’t want [any] little change, we want some real change.”

And we’ll end with this.