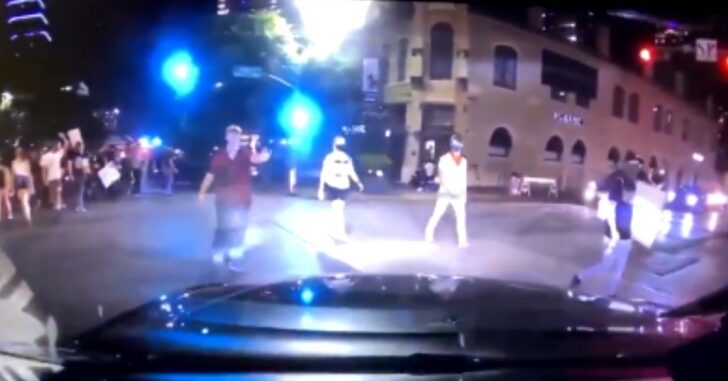 Video and photos are making their rounds and quickly coming out that show different views of what took place Saturday night in Austin, that ultimately led to the shooting death of Garrett Foster, a BLM protester that many say has been at the protests for the last 50 days.

Sporting an AK-47, Foster seemingly confronted a driver of a vehicle that drove towards the crowd.

A photo, possibly a screen grab from a video that I have yet to find, apparently shows Foster next to the car with his gun pointed towards the ground.

The video below has 2 videos, along with the photo.

One witness described to reporters what they saw;

“As we’re walking down passing Fourth Street, a blue car just come swerving out into the middle of the street almost runs over a bunch of protesters and everybody around starts like smacking the car trying to get him to slow down,” the witness said. “He pulls down his window and he fires three shots into the guy. From point-blank. No words no nothing. And then rolls up his window and zooms off.”

The car in the video, in my opinion, doesn’t seem to be driving out of control or incredibly fast. There are many other factors that we simply don’t know about yet, and will keep an eye on this as the story develops.