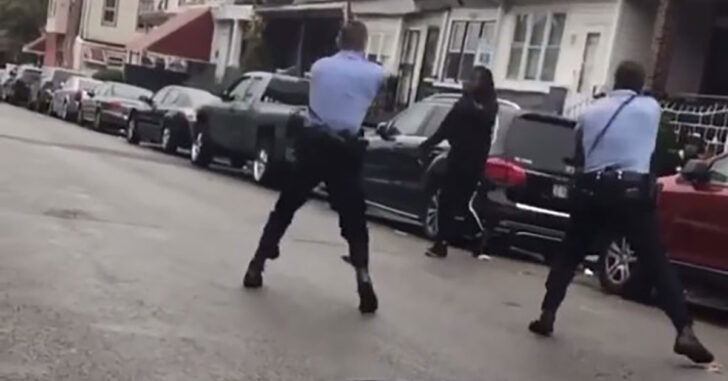 A black man in Philadelphia, 27-year-old Walter Wallace Jr., was shot and killed by police after he came at them with a knife. These are reports from both police and witnesses, and after news of the incident spread, protests began in the city.

The shooting of Wallace is seen on cell phone video that was captured by a witness. The video is below and graphic in nature. Proceed with caution. We share this to look at how the scenario played out, and if it seems that the officers were justified in their decision to shoot.

According to the family, Wallace suffered from mental illness and was taking medication. Prior to the shooting, family members and witnesses tried to talk Wallace into dropping the knife, which he refused to do.

A graphic video emerged that purportedly showed the moments leading up to the shooting. It showed officers pointing their guns at Wallace as he walks in the street and around a car. He walks toward the officers as they back away from him in the street, guns still aimed at him.

They yell at him to put his knife down. The two officers then fired several shots and Wallace collapses in the street. A woman runs up to him screaming while several bystanders then approach him.

It is unclear in the video if he had a knife. Witnesses said he was holding one.

Having a person advancing towards you with a knife is a scary and very serious thing. The police were called about a man with a knife, and go to that call in part to protect the community. Things get exceedingly difficult when the person has mental health issues, and it’s never a clear-cut scenario.

Some were asking why the officers weren’t carrying tasers, saying that the approach would have been better suited for the situation. I’d have to disagree, because a person with a knife can close distance in very quick fashion, opening officers up to being attacked. Tasers are unsuccessful in many cases as well, and do not always stop an individual from advancing.

It’s a situation that no one wants to be in, and the answers aren’t easy, but there are definitely some questions.

After the shooting, protests formed around the city, and then the bad actors came out after night had fallen. Businesses were looted, fires were set, and we can’t help but be reminded of the ongoing unrest that’s been happening across the Country this past summer.

30 officers were injured, with one officer being run over by a truck. That footage was caught on camera, shown in the video above.

Philadelphia may be in for a tough week, or longer, as more protests and riots are expected to continue.