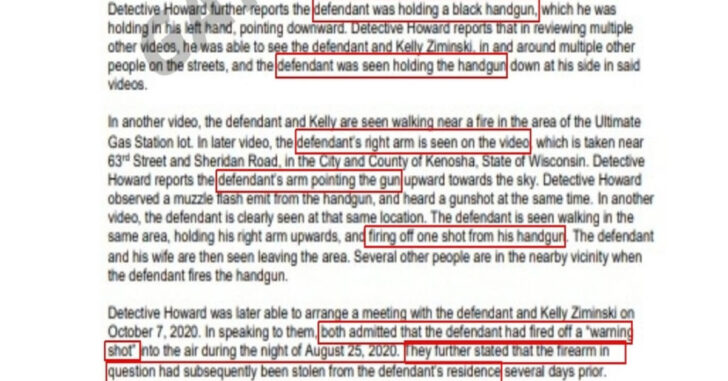 By Dan Zimmerman via TTAG and Republished with Permission

On October 13, 2020, the Gateway Pundit broke the story that the person who fired the first shot the night Kyle Rittenhouse was forced to defend his life, Joshua Ziminski, was arrested and charged.

The man who fired the first shots from behind Kyle Rittenhouse during the fatal incident in Kenosha has been charged.

Joshua Ziminski, 35, has been charged with disorderly conduct and use of a dangerous weapon for firing his weapon during the incident on August 25.

On the face of it, that would appear to bolster Rittenhouse’s self-defense claim. He was being attacked at the time by Joseph Rosenbaum and someone fired a gun. Sane people would accepted that he had reasonable cause to fear for his life. Apparently the prosecutors think so as well.

This is Ziminski’s jail booking sheet:

The only charge that remains is disorderly conduct; the felony recklessly endangering safety charge for firing the handgun will not proceed. Having to argue in one case that Ziminski fired the first shot that night might have proved embarrassing while trying to prosecute the Rittenhouse case, where their story is that Kyle started all the trouble. So Ziminski’s inconvenient gun charge has simply gone away.

Also an oddity in the Ziminski situation: the lack of any charges for possession of a firearm. Per a Wisconsin Right Now report, Ziminski has multiple convictions for violating harassment orders, which may make him a prohibited person for domestic violence. He also has a 2005 marijuana conviction which definitely gave him prohibited status.

The Ziminski charging document, as seen above, makes it clear that not only do the police have video evidence of Ziminski in possession of a firearm, but Ziminski and his wife both admitted that he had a gun. Other people have been convicted of unlawful possession on weaker evidence, but the Wisconsin prosecutors cannot admit that a bad guy had and used a gun that night before Rittenhouse did.

It appears that the prosecutors prefer to let a violent criminal off rather than lose the chance to persecute Kyle Rittenhouse.