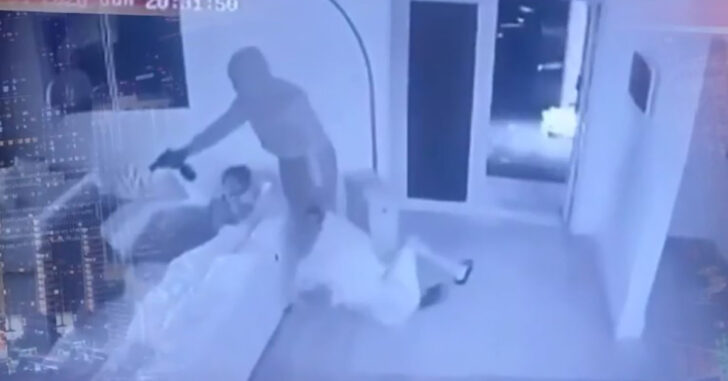 MIAMI, FLORIDA — Two weeks after exchanging gunfire with two armed intruders, 26-year-old Ashley Pacheco shared her story of fighting back to protect herself and her son.

On October 4th, a guest of the family pulled his Mercedes into the driveway of the home on Northwest 86th Avenue in Miami. As the driver exited the vehicle, he was rushed from the street by two armed men who forced him inside the house. The residents, who were watching their home team play in the NBA finals, were ordered to the floor.

Instead of complying with the gunmen’s orders, Pacheco grabbed her 7-year-old son from the sofa and ran to the bathroom. It was then that one of the armed intruders began shooting at her, firing six or seven shots by her account. She yelled “Don’t shoot! My son is in here!” . At that point, she retrieved her own handgun and returned fire, forcing the intruders to flee with watches and jewelry stolen from the other occupants of the home.

“My worry was my husband and my son. Honestly, I wasn’t scared. It we just, my reaction was to get the gun and to defend. The could’ve killed me, and they could’ve killed my son. They were shooting right over his head. They didn’t care.”

Moments after she returned fire her husband, Daniel Pacheco, and another victim rushed into the room. After taking the gun from her, Daniel shot at the getaway vehicle as it sped away. Surveillance cameras captured both the initial attack on the driver outside the home and Pacheco exchanging gunfire with the intruders from her bedroom. Despite bullet holes throughout the home, none of the guests were injured, and the robbers remain at large.

Once again, we see the importance of having a firearm in the home to defend family members. Had the Pacheco’s not had a way to defend themselves with deadly force, a fun night of having friends over to watch the game could have easily turned deadly for them and their guests.

Was she right or wrong to ignore the orders of the gunmen? Did she unnecessarily put herself and others, especially her son at risk by doing so? Would the robbers have been satisfied with taking their property if she had complied and left without firing a shot? Should her husband have ran outside and fired at the escaping vehicle?

We often think that there is safety in numbers, especially when in our own home and surrounded by family and friends. Would you have been better prepared? How would you have reacted?